One day in Birmingham: what to do and see

What to do and see in Birmingham in a day 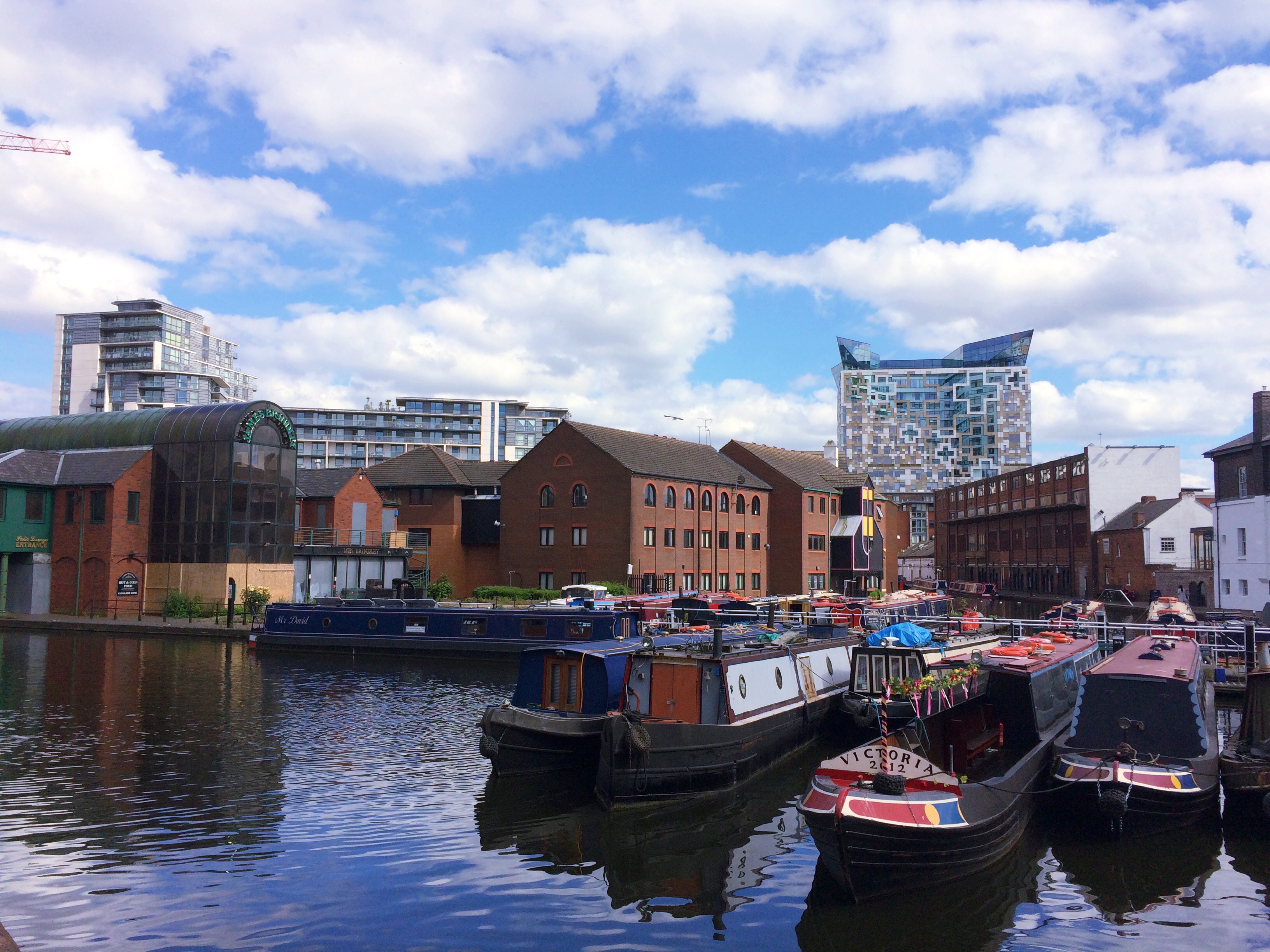 What to see in Birmingham.

Last year at the beginning of summer I was in England for work. Between an event and the other me and my colleagues had 24 hours of total freedom.

Where we go? Choice arduous but ultimately won the second city of England: Birmingham.

This beautiful city in Industrial style is famous not only for the red bricks that cover most of the buildings but also for the 60 kilometers of waterways that almost inevitably change the profile of the city.

Birmingham, located in Central England, more precisely in the Midlands, is a multiethnic city and constantly evolving. Suffice it to say that almost half of the population is non-English origin and that in one hundred years has gone from being called “the city of a thousand trades”, to be the UK’s largest industrial center. Today it is changing again and is gearing towards tourism and the tertiary sector. 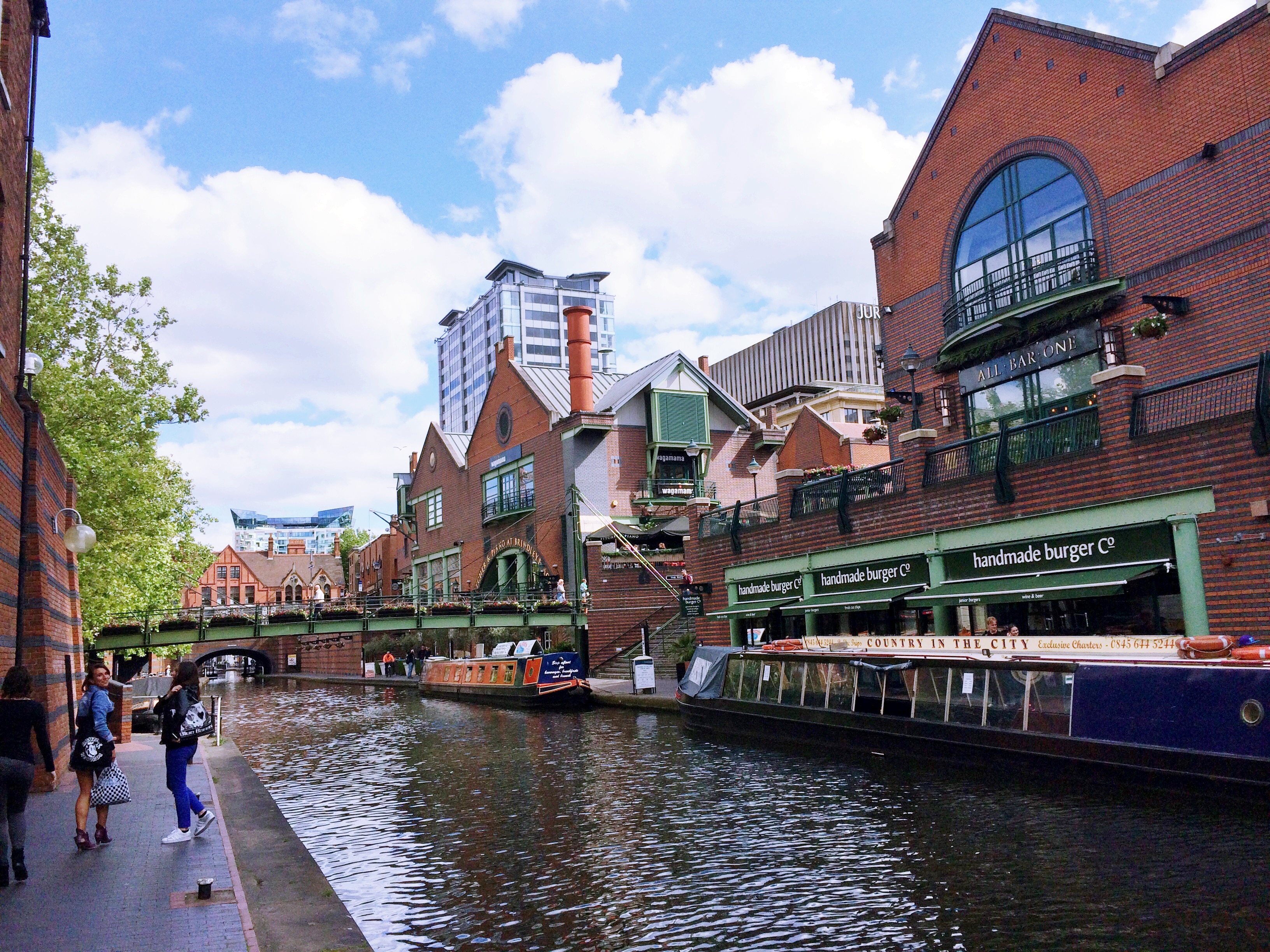 But let’s start from the beginning.

We arrive in Birmingham New Street Station very soon and between one yawn and one another we can reach our favorite coffee on the go: Pret a manger in New street! Moving on, we see a clothing and accessories shop “vintage rockabilly” of those who are only in the UK. Getting in was a must.

We waited for the shop opening time drinking moka (a chocolate cappuccino) and eating various croissants and egg sandwiches without a precise order. I’m sure there was also some cucumber. Oh well.

We enter the Blue Banana – and we start to try out clothes that seemed to have come out of Grease but with the most suitable patterns for Emily the Strange.

I buy a beautiful blue dress with skulls and candy-colored flakes, Sabri’s skirt with peacocks and Lucia a sailor set. Let’s start well. 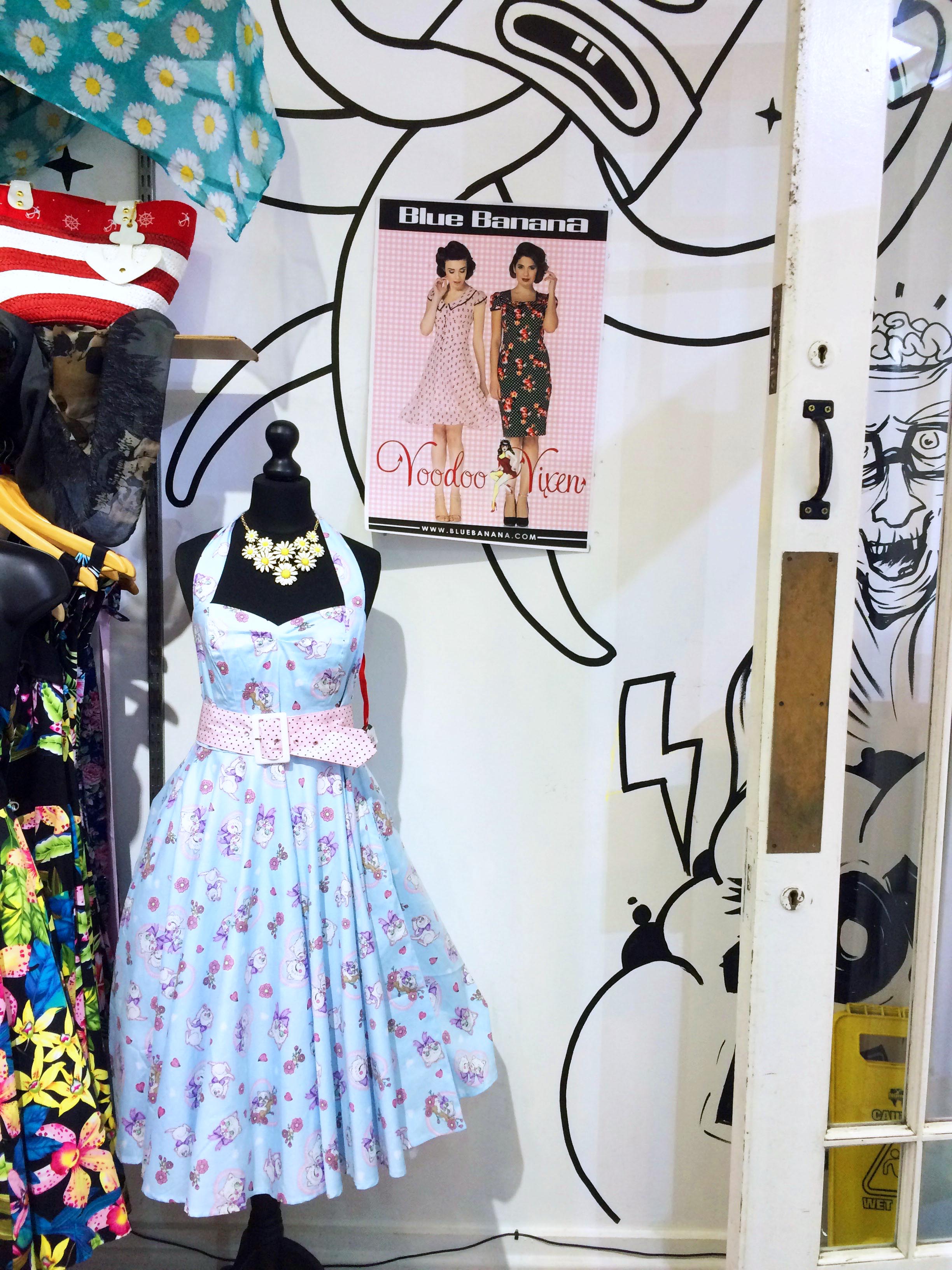 After spending enough money on Tendle Street, we head to Birmingham’s Cathedral in a beautifully refurbished neighborhood.

The cathedral built in 1715 is one of the few examples of British baroque architecture in England, and is also the oldest Birmingham building still used for its original function. The windows are the focal point of the cathedral, the stained-glass polychrome is disarming from the inside and gives the grand central nave a very impressive atmosphere. Absolutely not to be missed!

We head north to the famous promenade along the canals and we arrive (ops) at the San Paul Church, surrounded by lawns filled with lavender and wooden benches where to rest.

We arrived in the Jewelry District of Birmingham where we have the highest turnover in jewelry manufacturing and trading in Europe. With the crisis of recent years this stunning industrial-style neighborhood is turning very fast and many factories are now coworking and creative businesses.

You might also like: ” London street art is to fall in Love! A journey along the best graffiti in London” 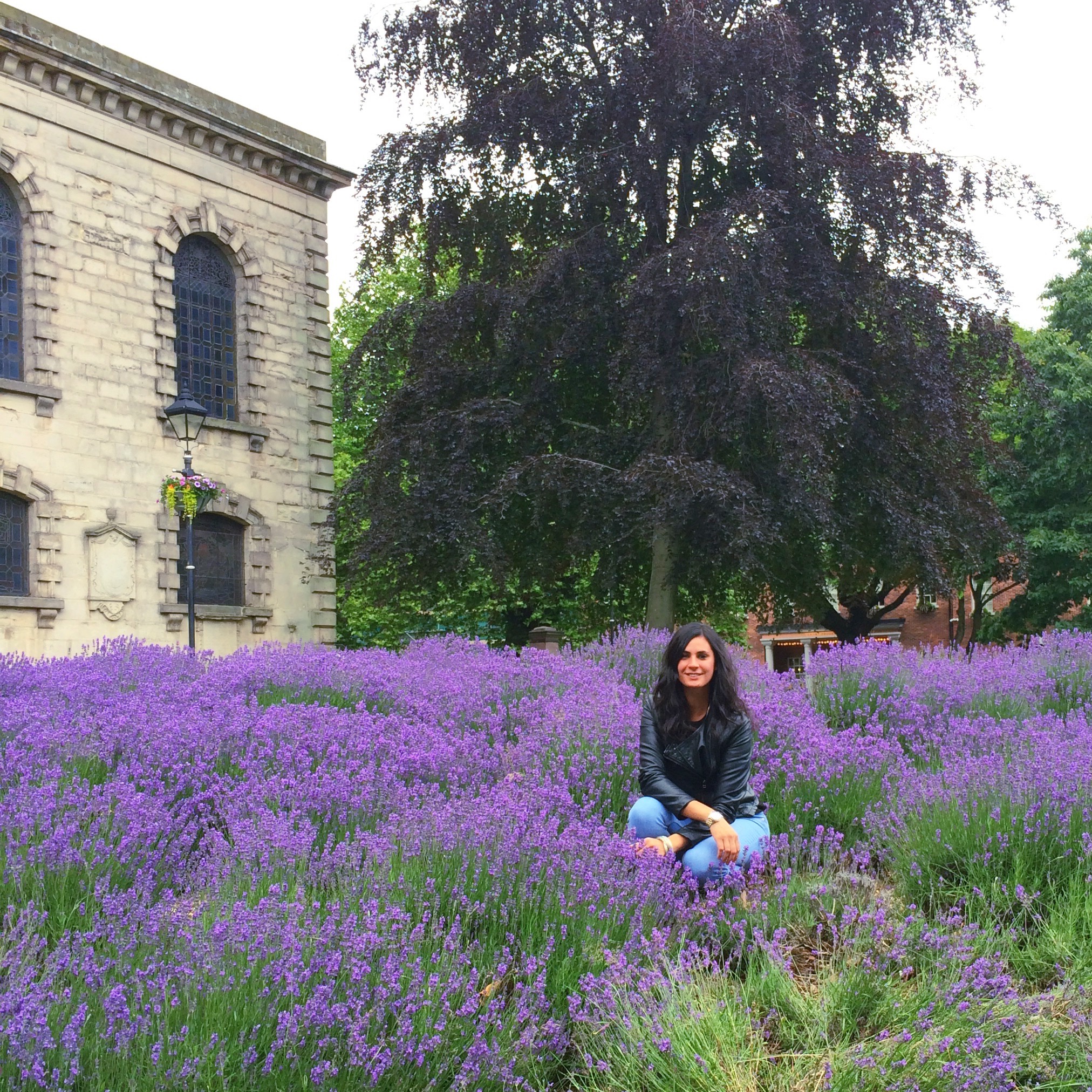 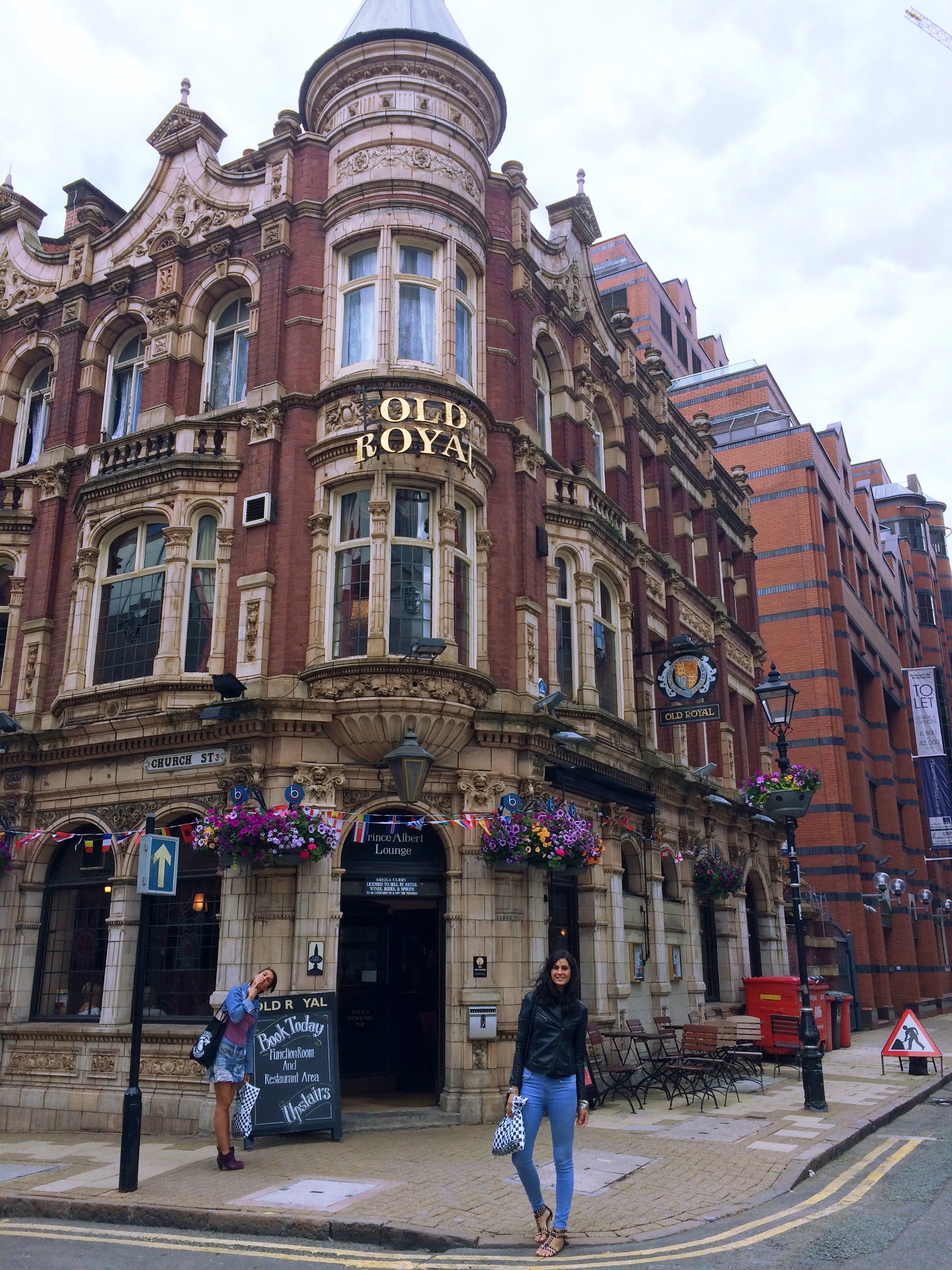 Visit Birmingham in a day: where to go and see

It is already lunch time and although we did not do much, an aperitif takes us, so we go back to Ludgate Hill Street we stop at The Actress & Bishop Pub, drink three good Pale ALE, take advantage of the bath and share.

Take the walk along the canals at a side of Ludgate Hill St. that will take you to the heart of the network of all English channels. Through a series of locks anyone with a river boat can move freely from one city to another in England or get to London! Superb!

We are walking for a good hour and arriving at the “Brindleyplace” one of the areas where we can notice the city’s renewal after the decline of industry in the 90’s.There were dozens of abandoned factories here, but with a long recovery they are now home to arenas, shops, offices, restaurants and even the Birmingham Aquarium.

We decide not to stay too far in the middle, and we choose to have lunch in one of the pubs overlooking the canal with outdoor tables and benches. We try jacked potatoes, fish & chips, meat pies and burgers. All watered by a Pimms jug, the typical English aperitif with ginger ale or lemonade. 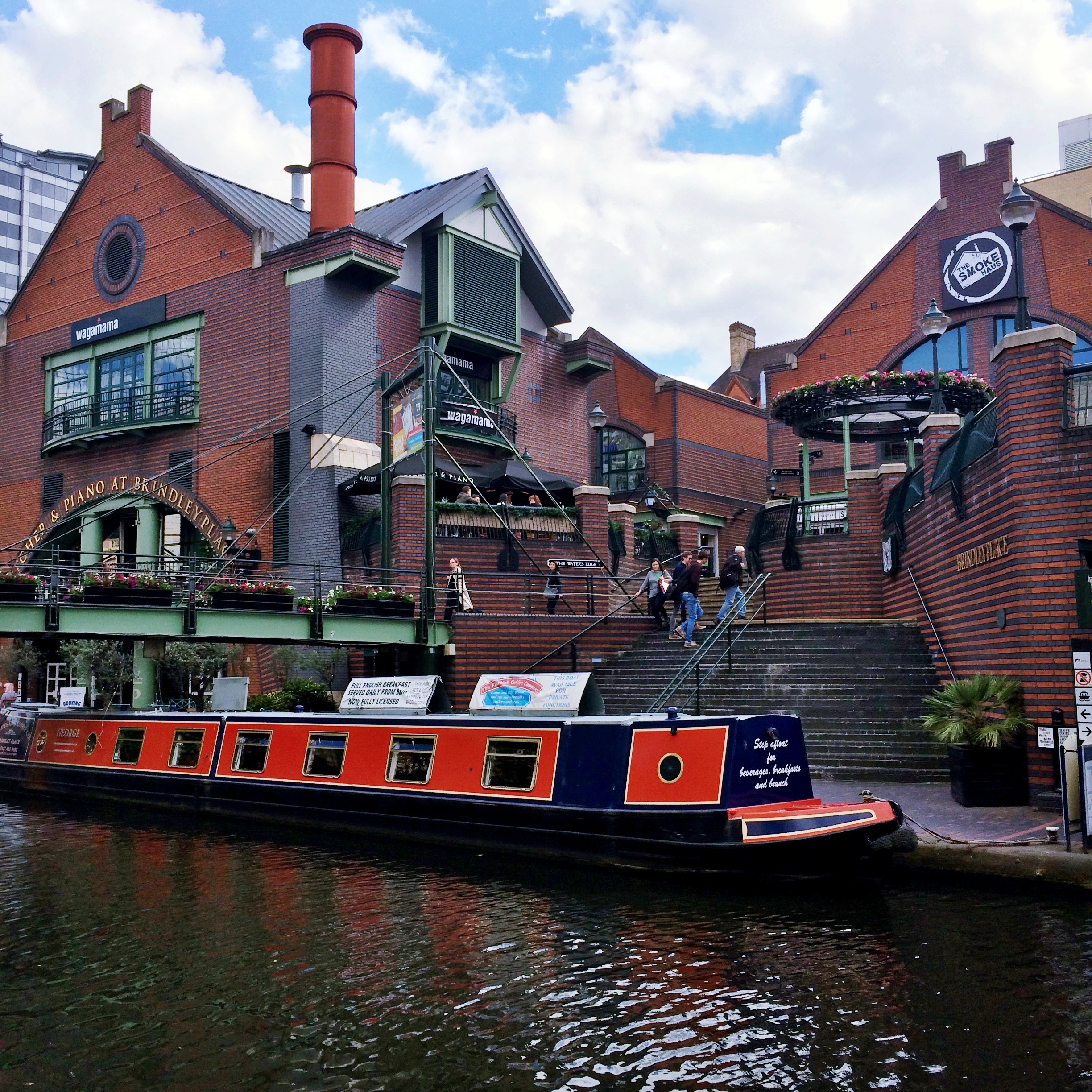 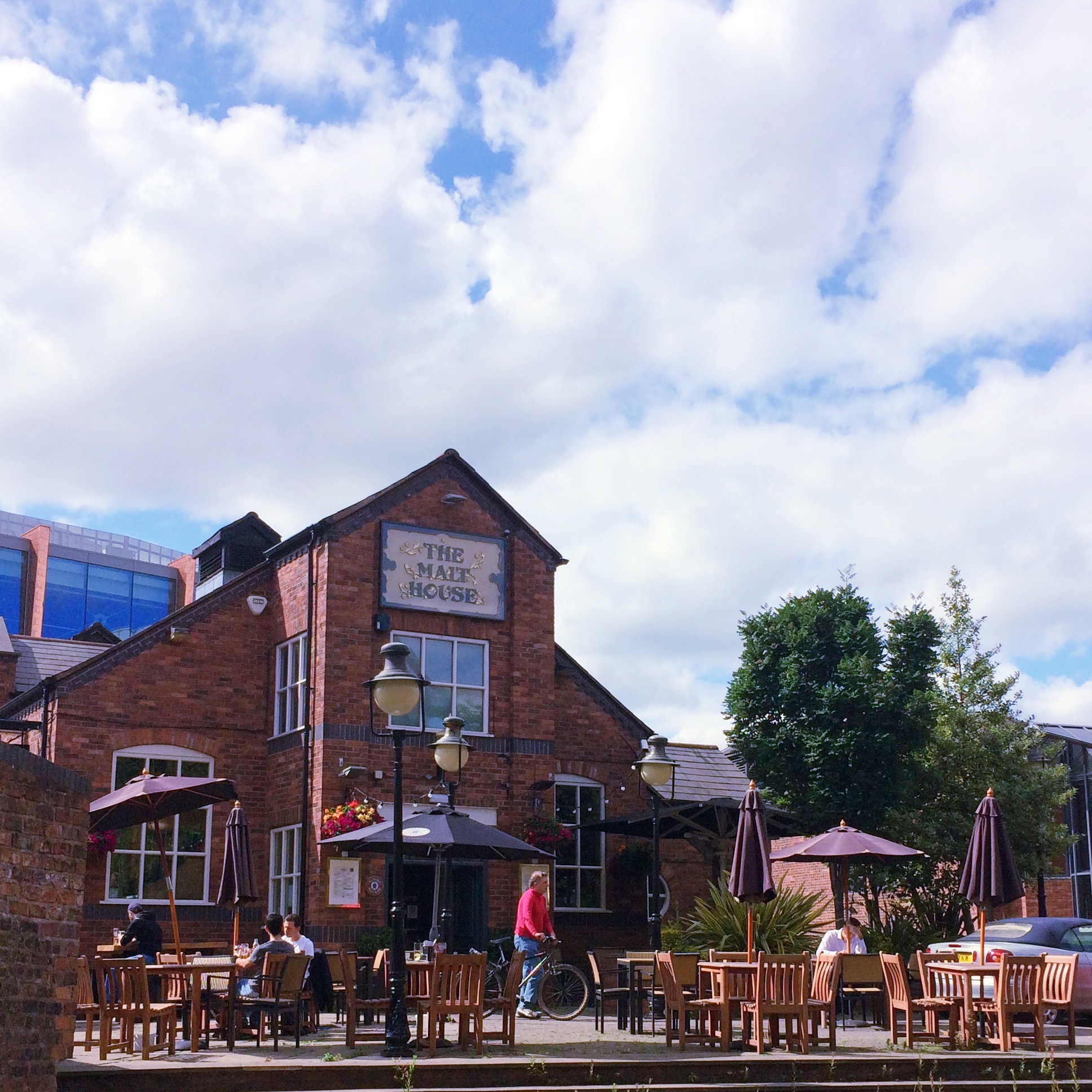 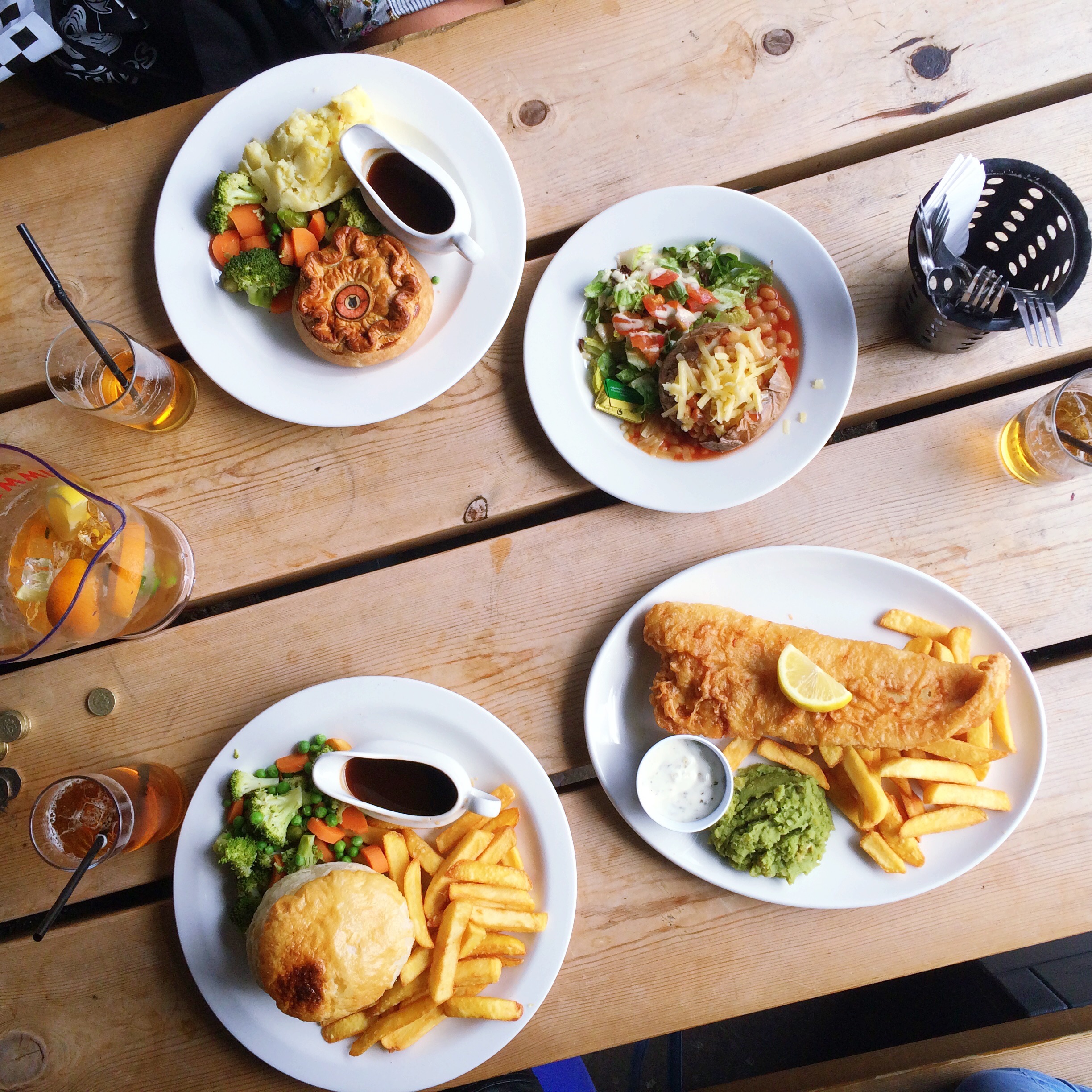 With some degree of extra euphoria we start to finish our tour in the Industrial area of Birmingham and visit the Gas Street Basin harbor where tens of colorful barges and river boats stand regularly.

We met a couple who lives in one of these boats. In order to earn, they sold handmade items to the market or walked by boat tourists. They had a wood burning stove on the bow to heat up, gas stoves, double beds, and even a bookcase. If it were not for the bad English weather I would have a thought!

From the harbor you can also see the famous “The Cube” a design building that has radically changed the skyline of the city. Designed by a famous architect, “The Cube” houses luxury boutiques, SPAs, shops, starred restaurants and apartments for a thousand and one nights. Better to look from the outside what you say? 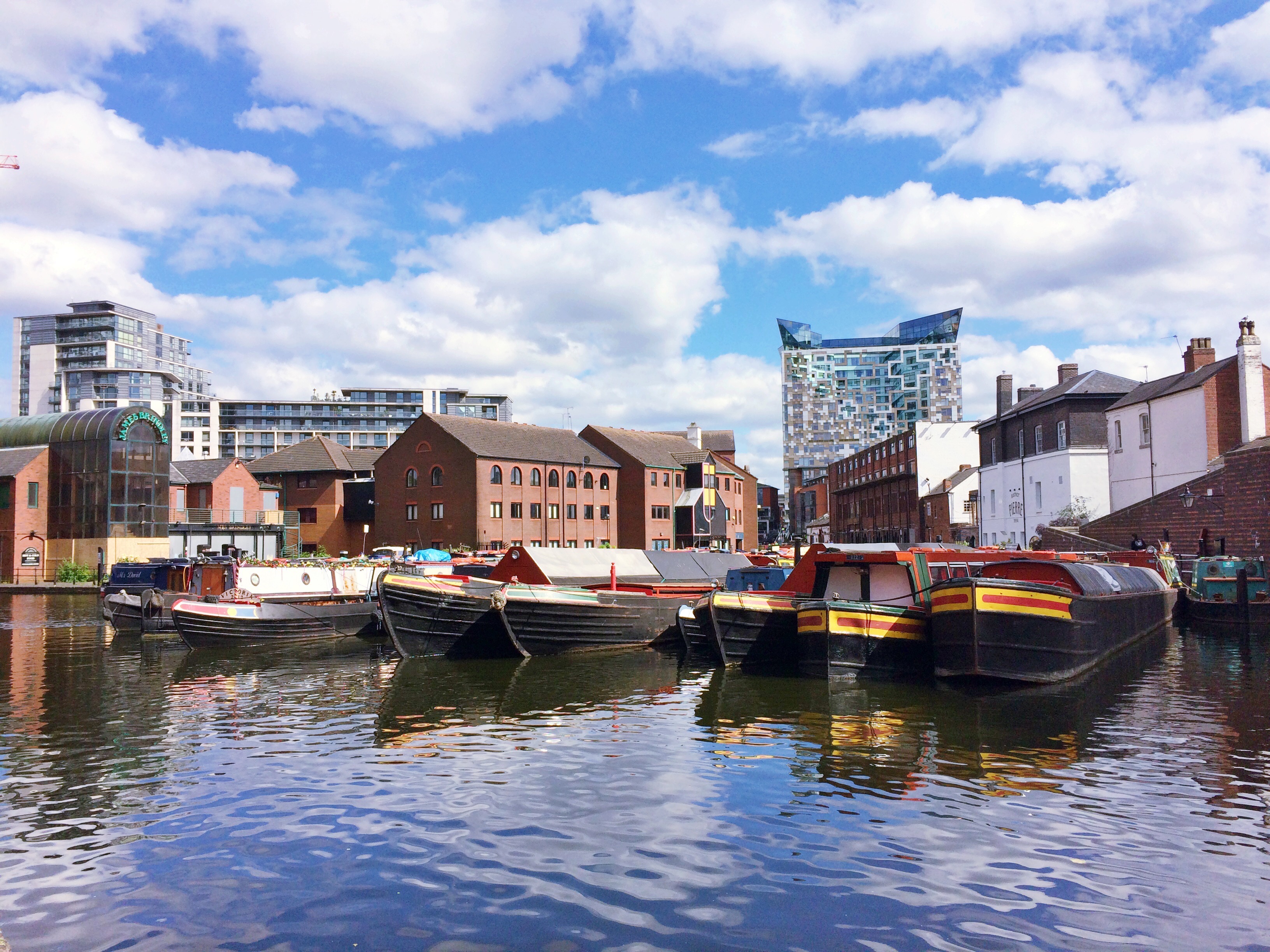 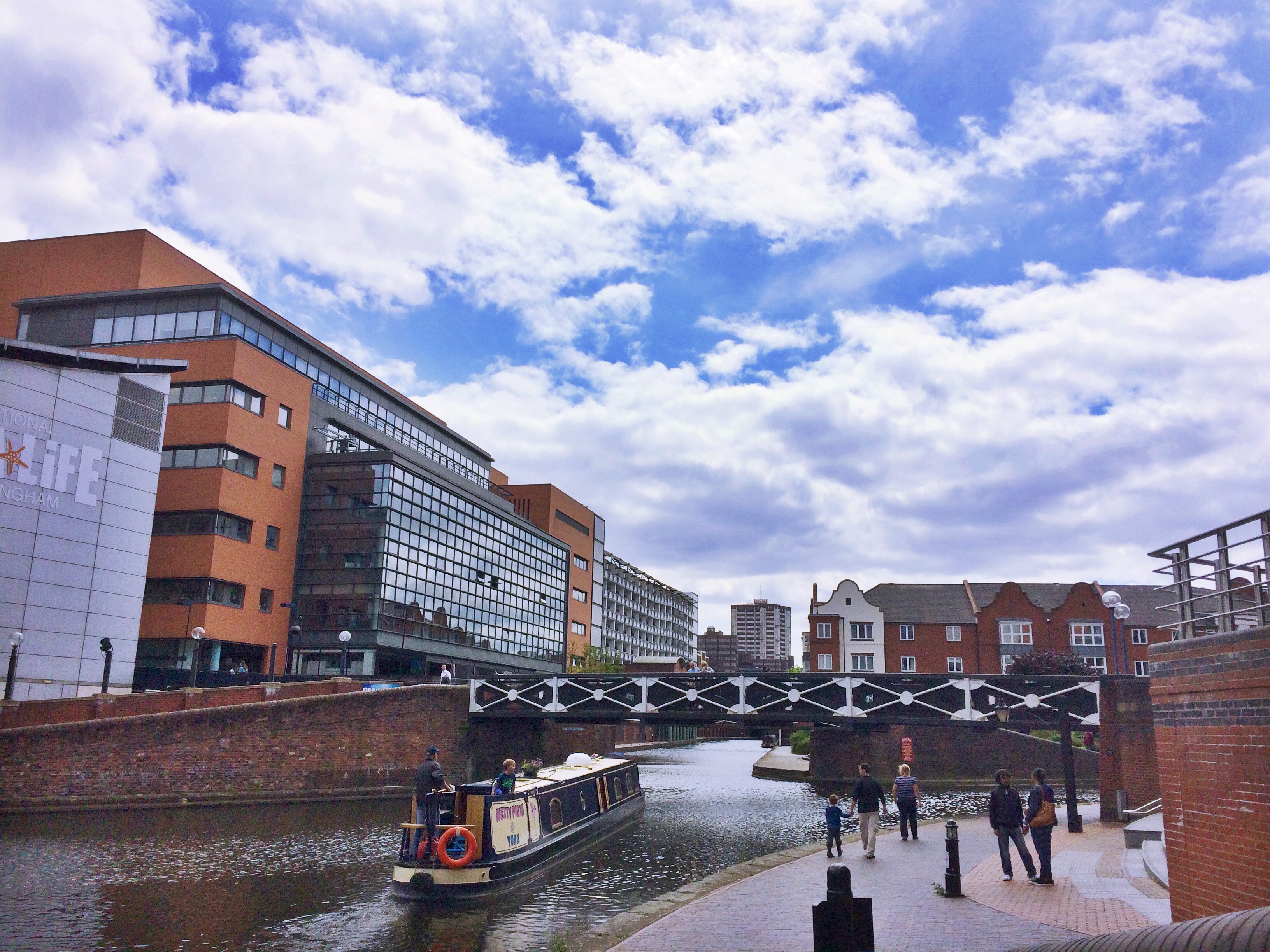 It is the time of the modern part of the city, and then here we come to one of the places to be missed in Birmingham: “The Library of Birmingham”, the largest public library in Europe, designed by the Dutch studio Mecanoo Architecten.

I recommend you visit it because it is beautiful both inside and outside. You can push it up the stairs to the top floor where a lush garden will make you enjoy the beautiful 360 degree view of the city ….  for free!

Going up to the top of the library you will notice how moving stairs are incorporated into the circular rooms of the library making it open and playful. Colors help to create a warm and enveloping climate that you would never want to get out of. On the top floor there is the “Shakespeare Memorial Room”, a reading room covered with antique wood in which to get lost reading a book. 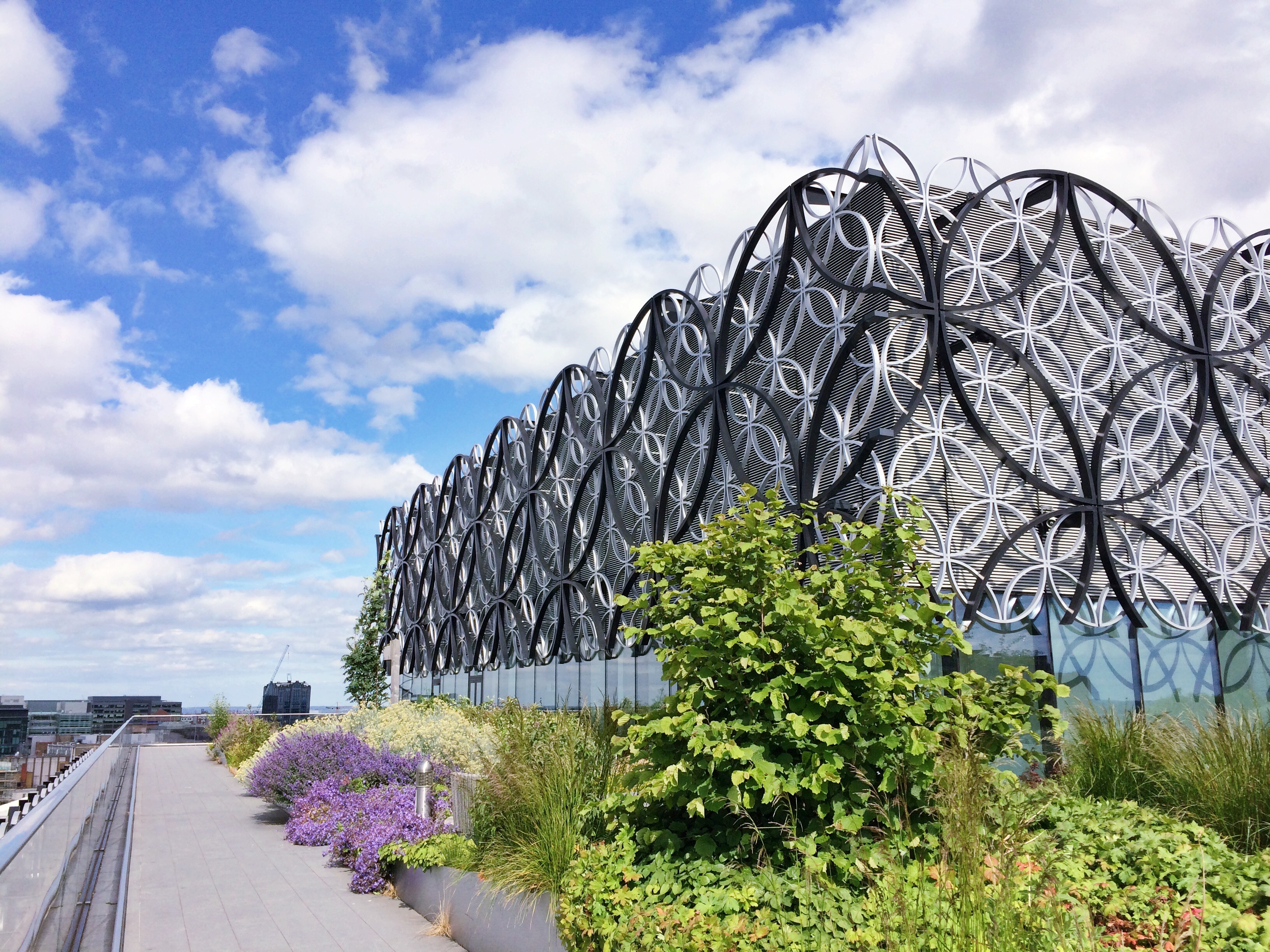 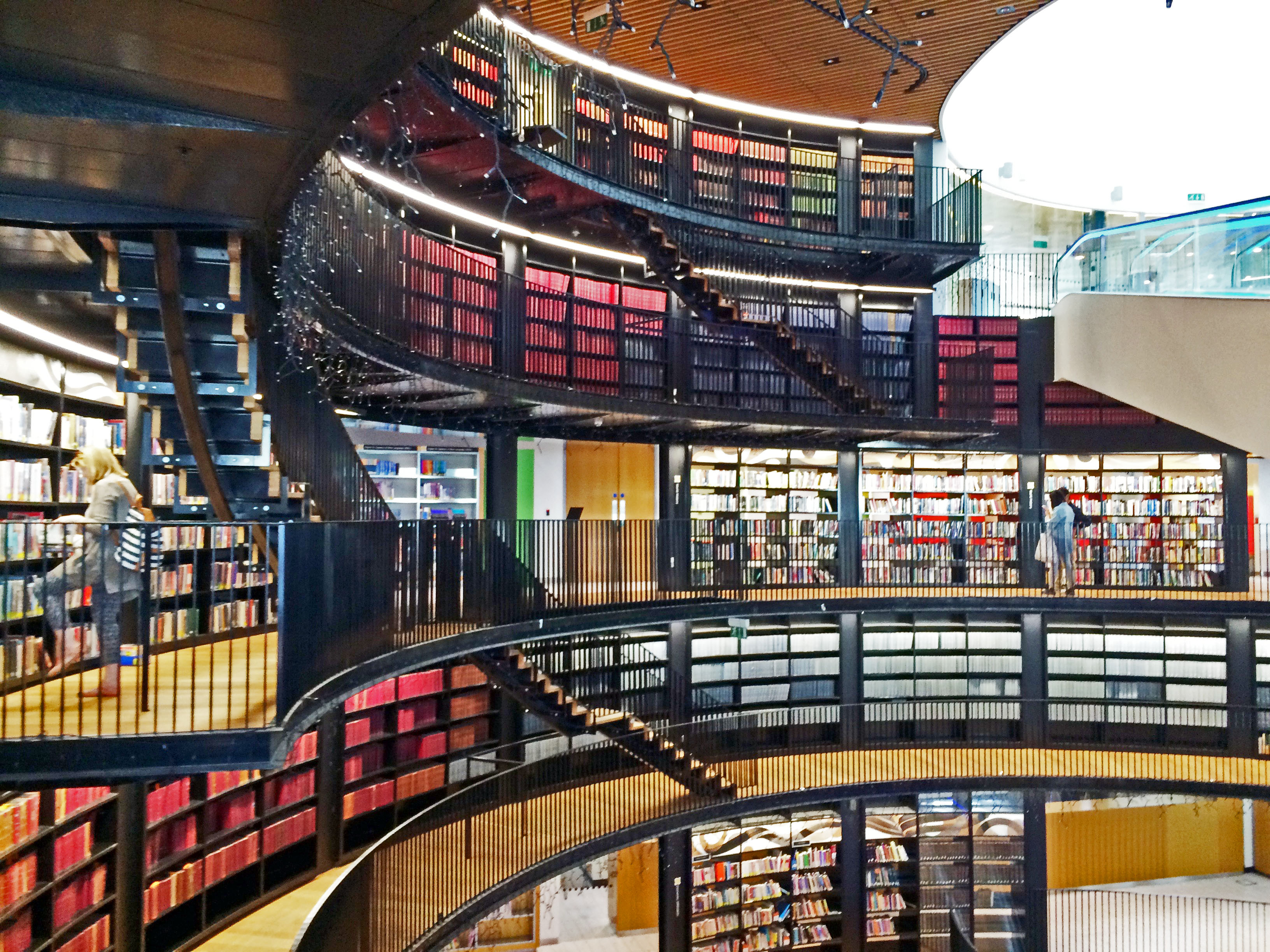 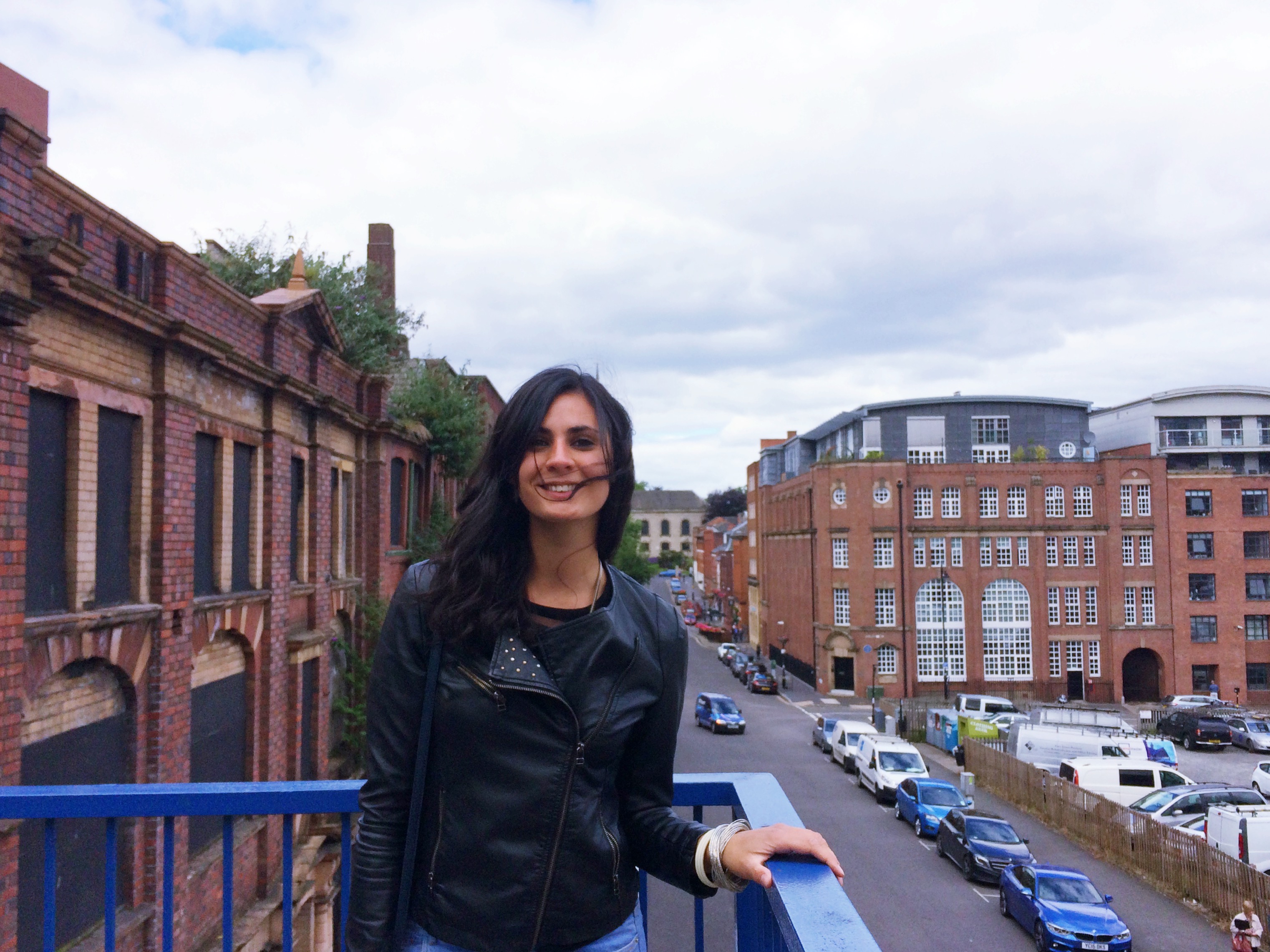 From the Birmingham Library with a convenient pedestrian street you can reach the center of town and one of the most frequented commuters, tourists and locals: Chamberlain Square. From here there are several shopping arteries, the street reaches directly from the central station and in this square you can find the Birmingham Town Hall, Birmingham Museum and Art Gallery, art school, various institutional buildings and everything in beautiful buildings of the 900.

To finish our tour we head to the famous Saint Martin Square where we have seen the award-winning “Selfridges & Co.” irregular futuristic building covered by thousands of reflective disks, the Saint Martin church completely enclosed by the Bullring shopping center and we found our beautiful New Street Station where to eat something before going again.

While I ate a plate of vegetarian Pho I thought how beautiful can become a city, even as Birmingham, through design, restoration and study of common areas.

For example, when they rebuilt the Brindleyplace area, they thought, besides entering commercial areas, arenas, cinemas and more, even building apartments to bring the population back to the city center and relocate abandoned neighborhoods.

Now that in every big city there is an increasing abandonment of the Center for improper prices or inconvenience that implies to live there, we should look in Birmingham one of the few cities that has been able to look to the future, collect the best parts of their past and start all towards a bright future. 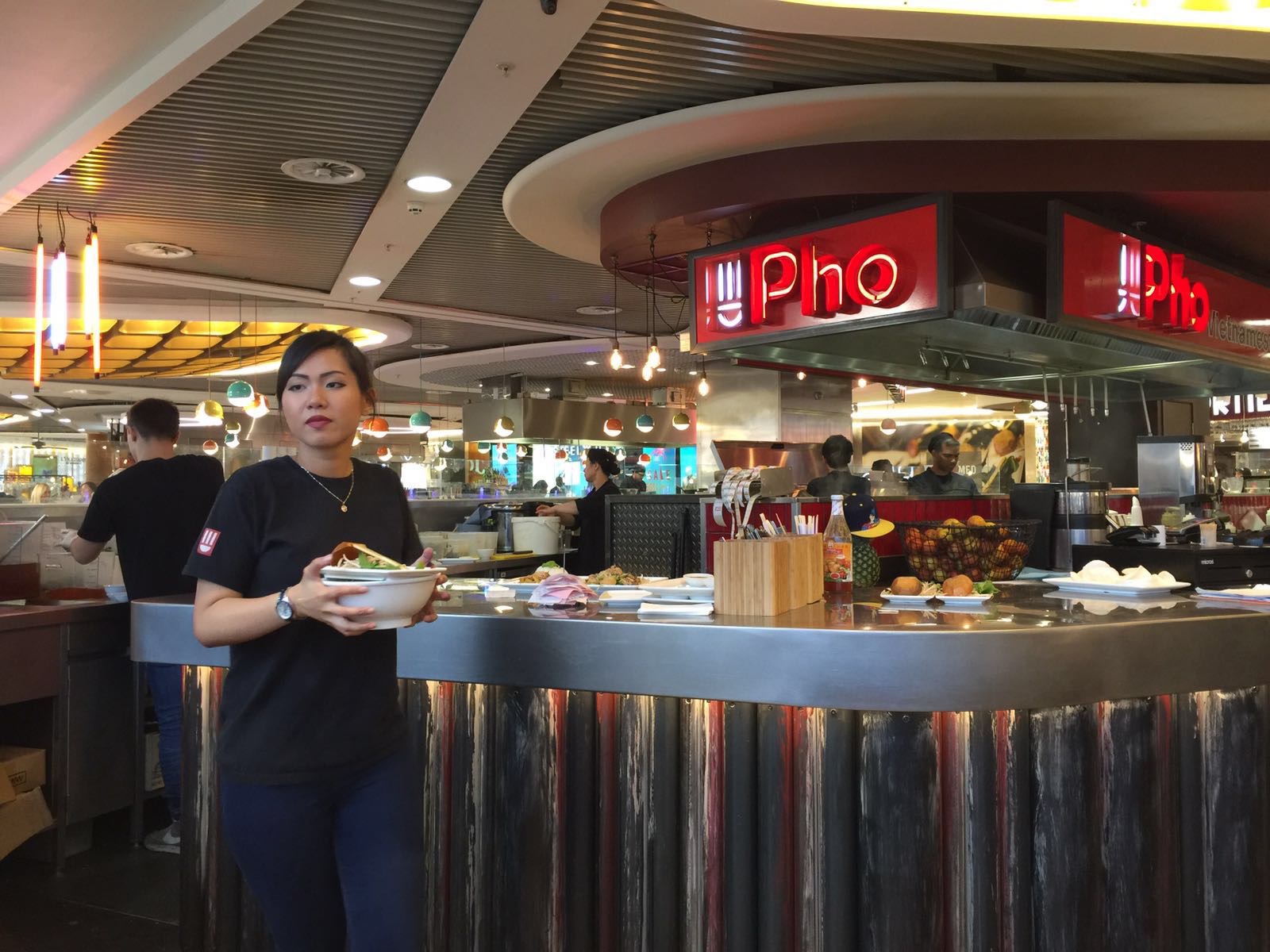 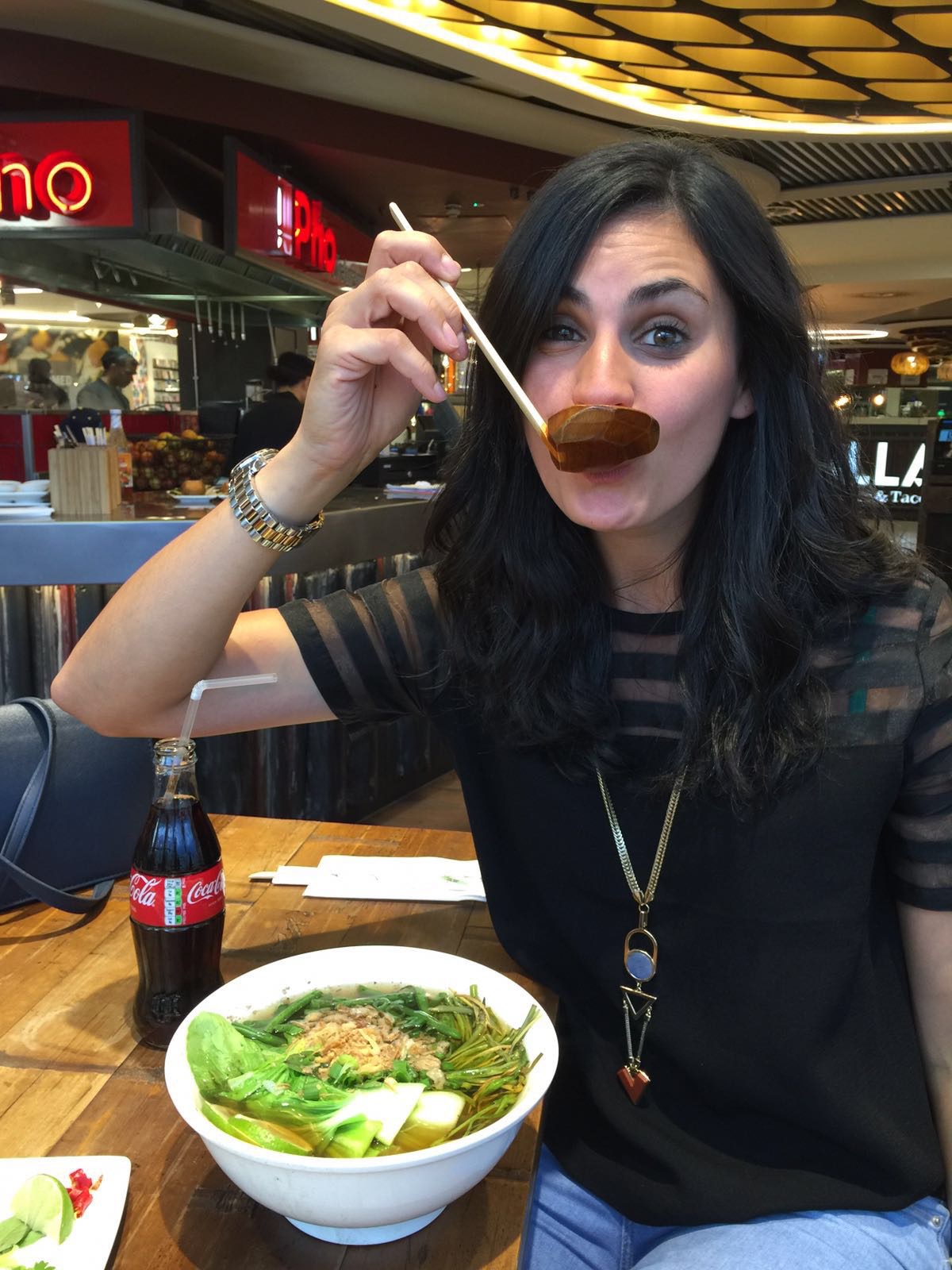 10 thoughts on “One day in Birmingham: what to do and see”