Palmanova, the famous 9-pointed star-shaped city-fortress, hosts in the bastions park, various itineraries to do on foot or by bicycle suitable for the whole family. 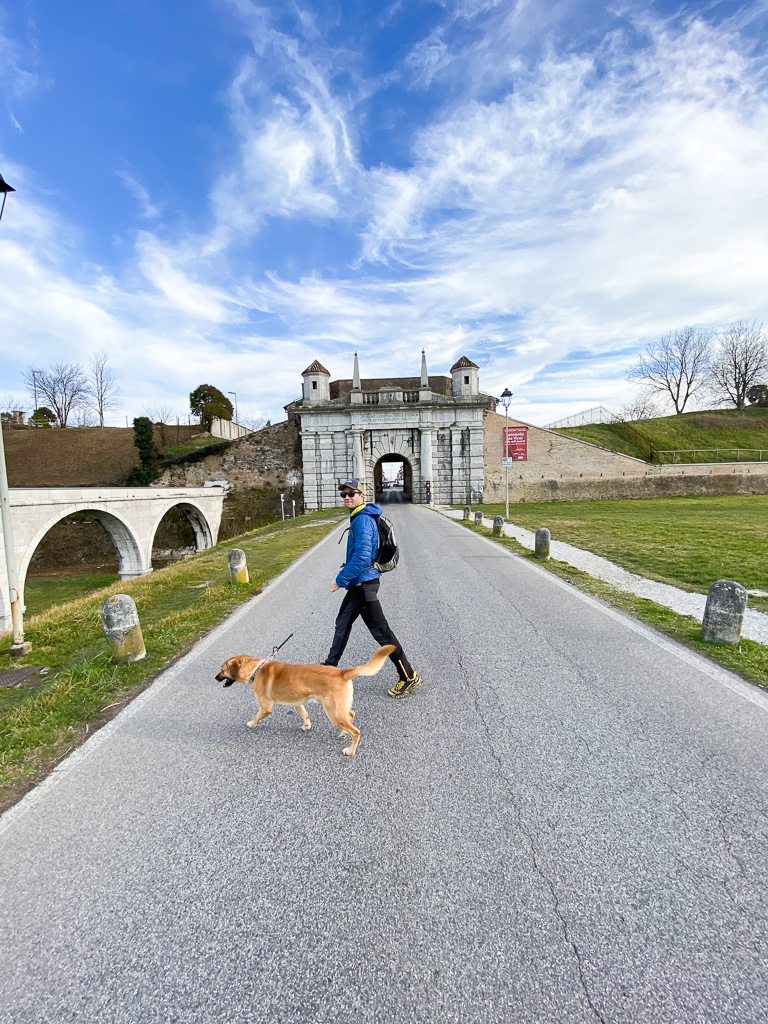 ^^^ That’s where we started, Porta Udine. You can park outside or inside the walls and the signs for the itineraries you will find them, clearly visible, just outside the 3 access doors to the city ^^^

After 2 work weekends and as many bad weather weekends, Simone and our inseparable dog Giorgino decided to do something different and spend a nice Saturday afternoon in Palmanova.

We love the mountains and the most demanding itineraries but sometimes we both like to give ourselves an easy walk not too far from home and  not need a great organization. 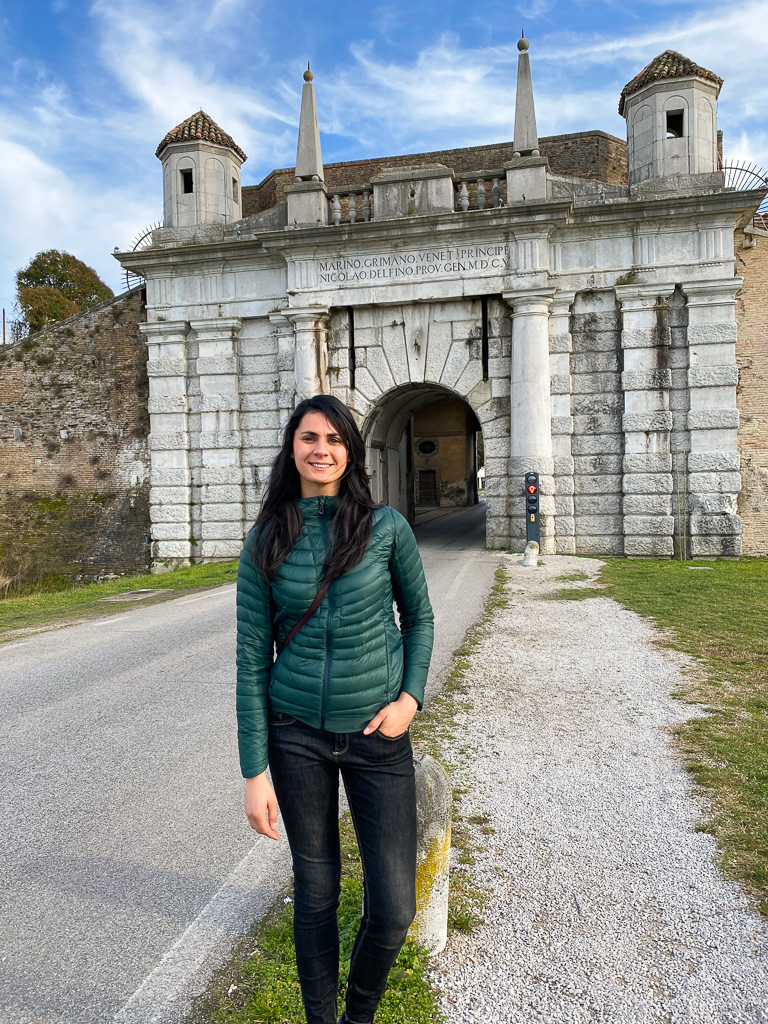 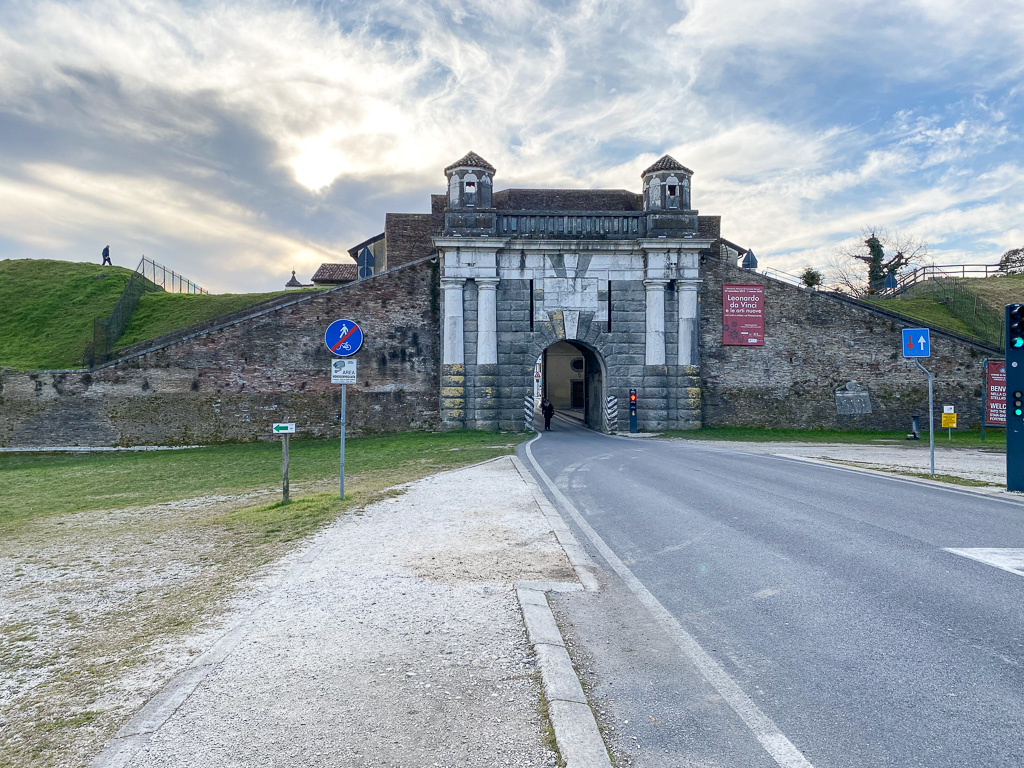 ^^^ We started from here. On the left you can notice the green sign of one of the routes ^^^

ITINERARIES AROUND THE PALMANOVA BASTIONS

There are around the walls of the city of Palmanova 3 types of pedestrian paths.

The moat low ring of 4 km long, the rivellini high ring  of 4.3 km and what we did, the mixed panoramic ring of 6 km that passes from the moat to the high path and widens up to the lunettes built by Napoleon in the 1800.

All itineraries are well signposted and follow dirt roads.

This is a perfect walk to bring our animal friends too just remember to keep them tied because there are always many other dogs. 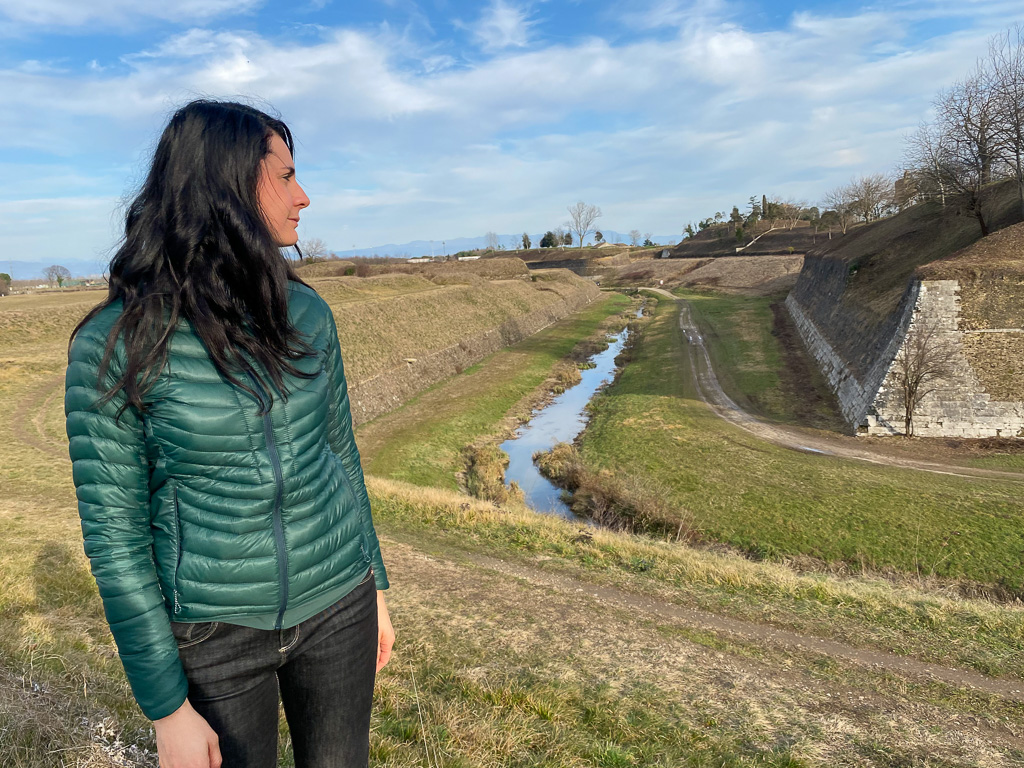 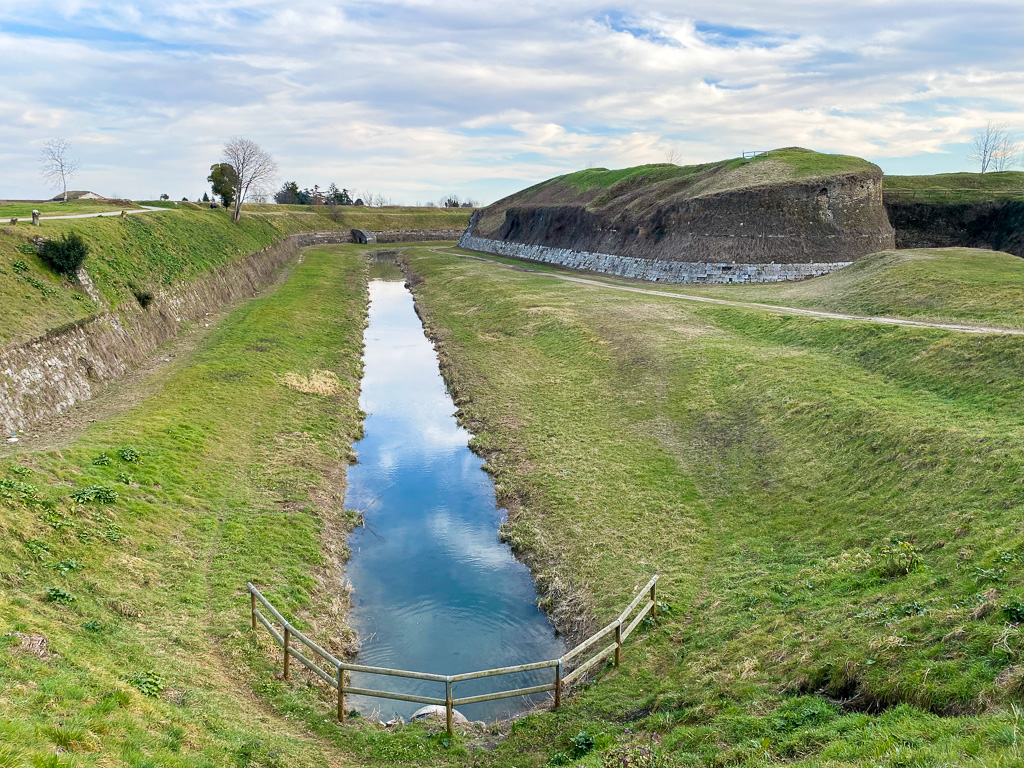 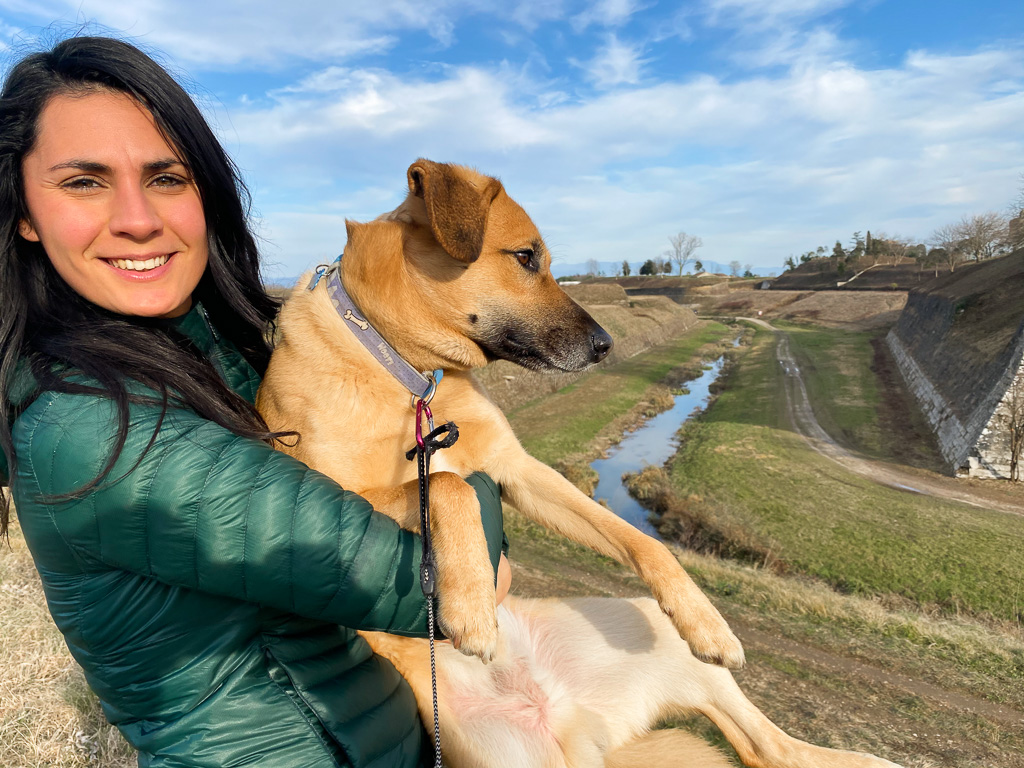 THE STORY OF PALMANOVA

Palmanova has a fascinating history that is also linked to the famous Giulio Savorgnan belonging to one of the most famous and noble Friulian families, the Savorgnan precisely .

Giulio Savorgnan was born in 1510 in the fortress of Osoppo and immediately shows a particular predisposition for technical, mathematical disciplines and also an attachment to the Republic of Venice.

Giulio served the Serenissima until old age by reviewing and modernizing many fortresses that helped the Venetian lords defend themselves against the Turks on many occasions.

When he was finally put on leave, he was again asked to create a fortress to defend the eastern borders of the Republic of Venice.

The Friulian nobles were initially opposed but when the word of the umpteenth advance of the Turks spread in Carniola (historical region located between Friuli, Carinthia, Styria, Croatia and Istria) broke the delay and began the work.

The city of Palma was born on October 7, 1593 and its main function was to defend Venice and its borders from the attacks of the Turks and finally to have a fortress large enough to host men, agricultural crops and all their goods during enemy raids.

Palmanova remained under the Serenissima Republic for more than 200 years until Bonaparte conquered it. It then passed to the Austrian Empire until in 1866 it was annexed to the Kingdom of Italy.

In 1960 Palmanova and its beautiful fortress was proclaimed “National Monument”.

OUR AFTERNOON WALK WITH APERITIF

There is no Saturday without an aperitif so why not take a nice walk in a town full of history and then a nice drink plus canapes !?

We left around 2 p.m. from Udine and strangely without traffic we arrived in a second.

We entered Porta Udine by car and parked it in the first street on the right that we met.

Leaving the car there, we took the backpack simply with water and a small bowl for Giorgi, 2 neck warmers and the power bank and let’s go.

We walked out of “Porta Udine” and looking up you can still see the large wooden wheels that were used to pull up the drawbridge of the past. Impressive!!!

Leaving the walls we found the signs with indications both on the right and on the left.

To our right we can see, parallel to the road, the elegant arched aqueduct of the ‘600 which carried water into the city of Palmanova.

This canal is the oldest documented river diversion in Friuli.

The waters come directly from the Torre torrent, which has long been under the jurisdiction of the Savorgnan family and a very important river because without him the city of Udine would not exist. 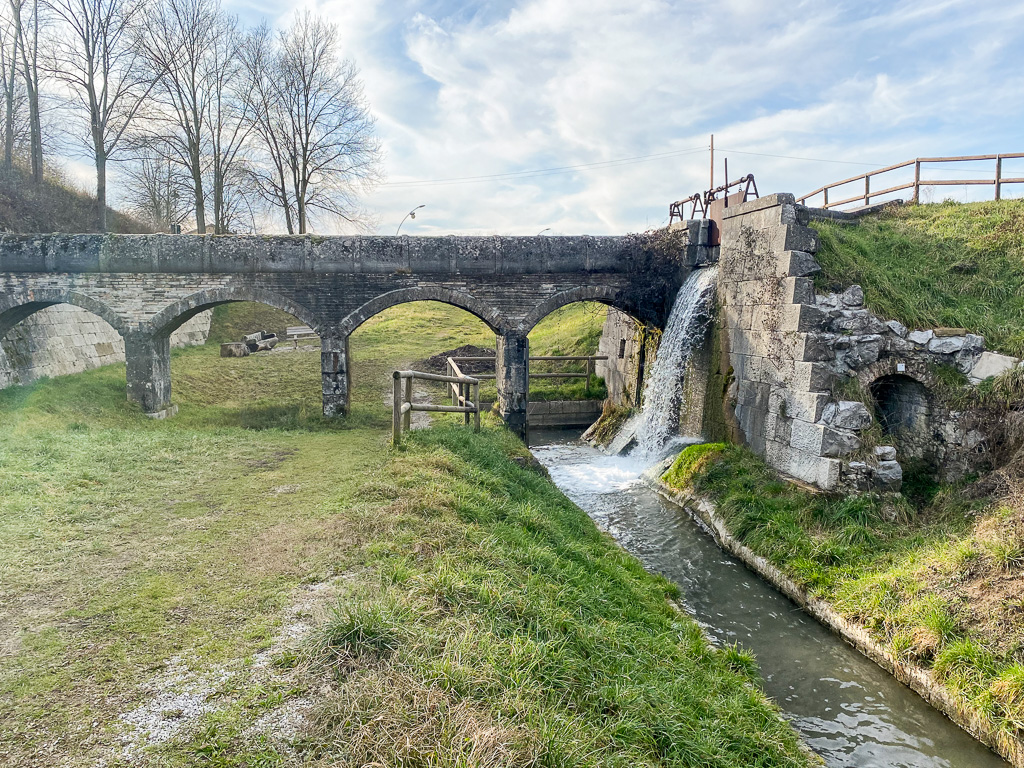 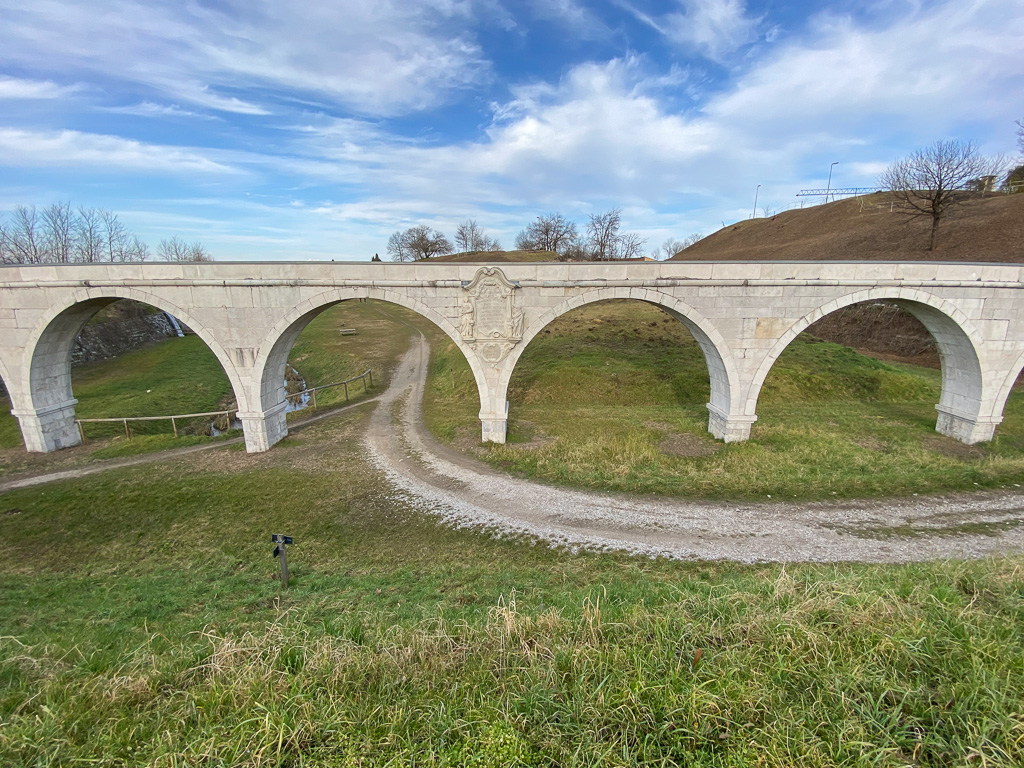 We decide to take the longest walk and follow the red signs.

The walk is easy and pleasant.

Sometimes we move away from the walls and pass near the Napoleonic lunettes of the third circle of fortifications and then approach the walls and make stretches along the moat.

We did the whole tour but if one was tired he could simply enter Porta Aquileia or Porta Cividale and go back to the car. 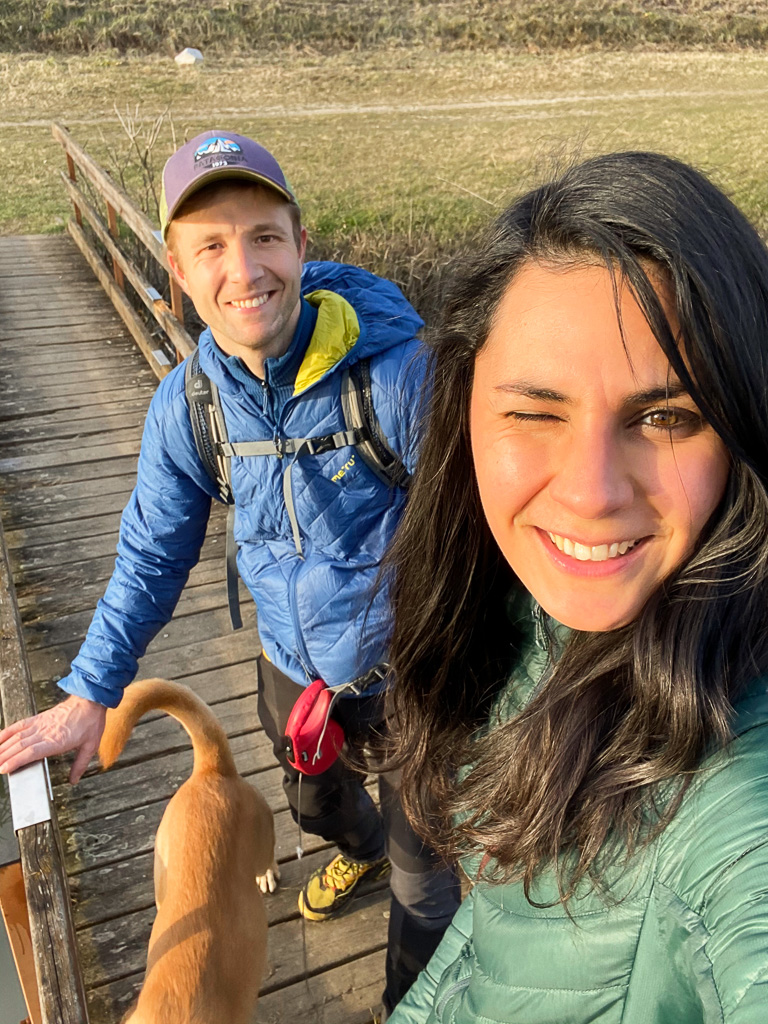 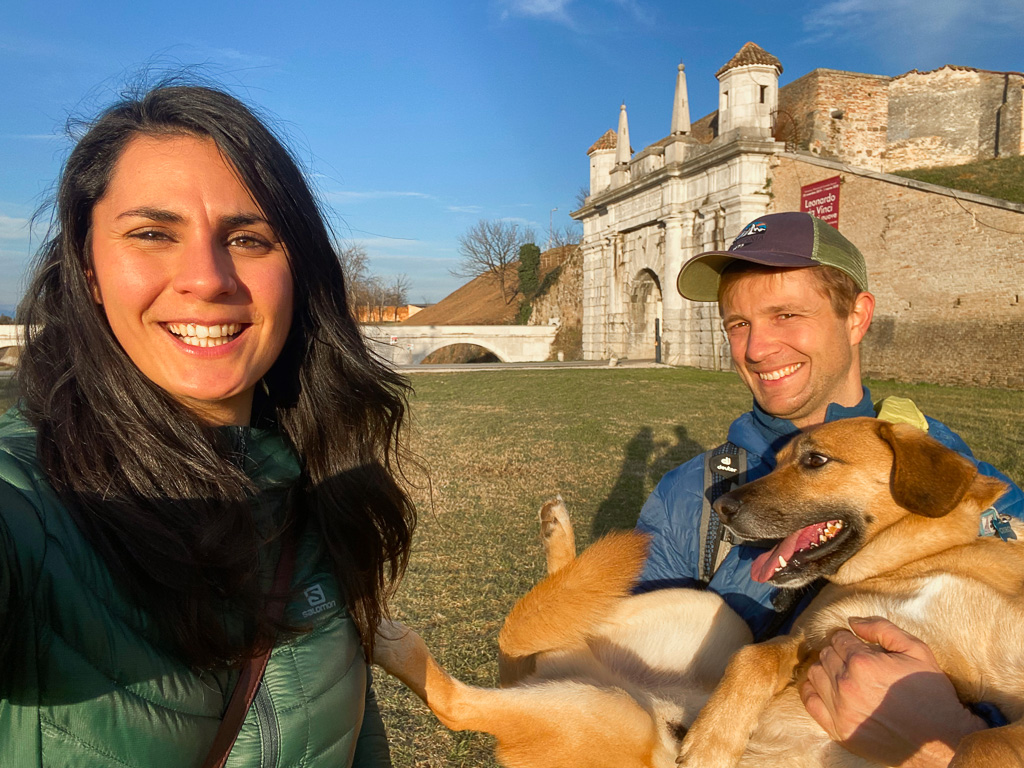 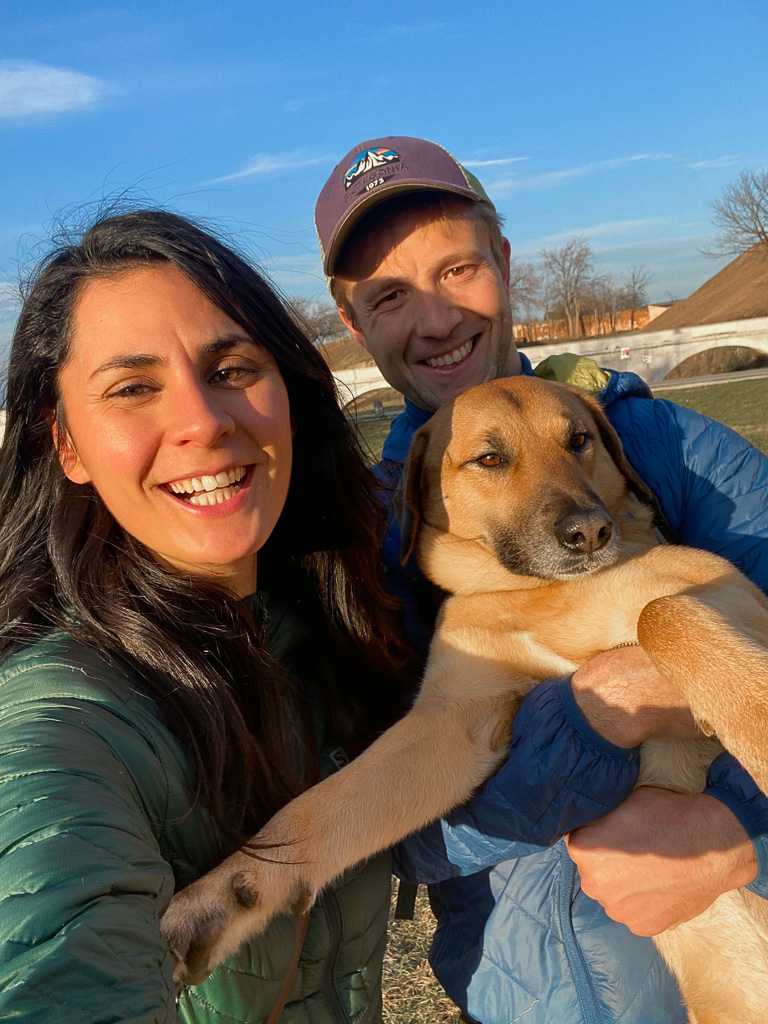 After the whole trek and with Giorgino we take the jackets by car and we head towards the center of Palmanova. 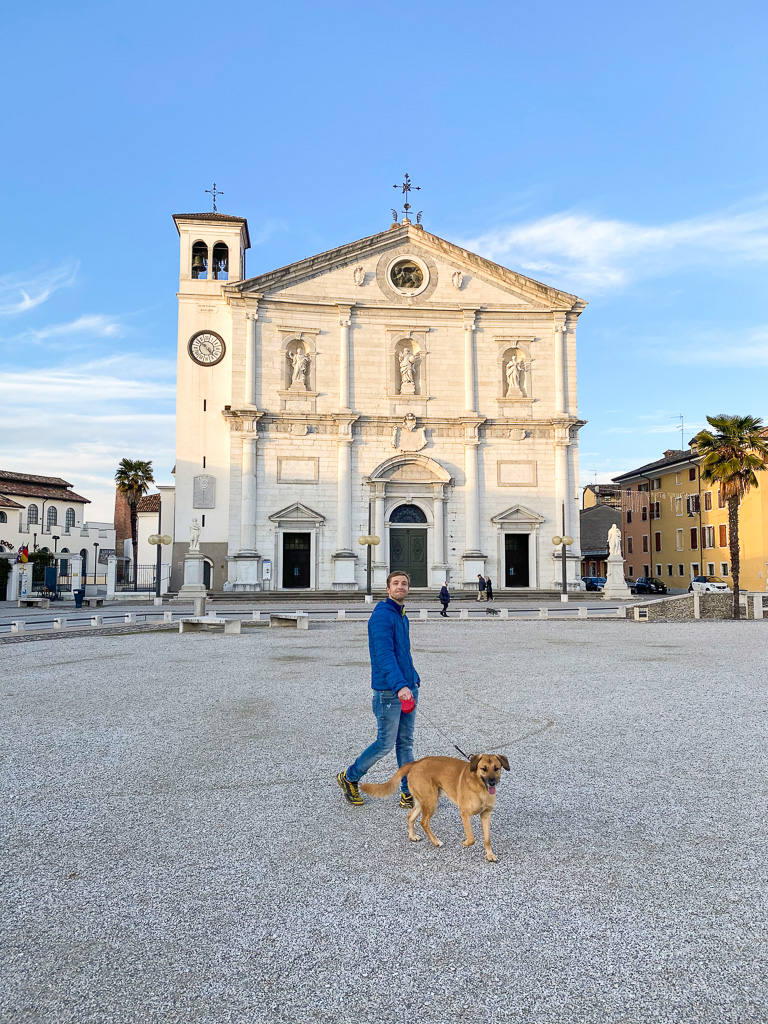 The square of Palmanova is beautiful, always alive and full of people and children playing.

It is always a pleasure to pass here.

We head to “Nonna Pallina”.

All of our friends recommended this place to us so we couldn’t not go there.

Nonna Pallina is a bar, ice cream shop where you can find everything even salty.

The shop window is something WOW. 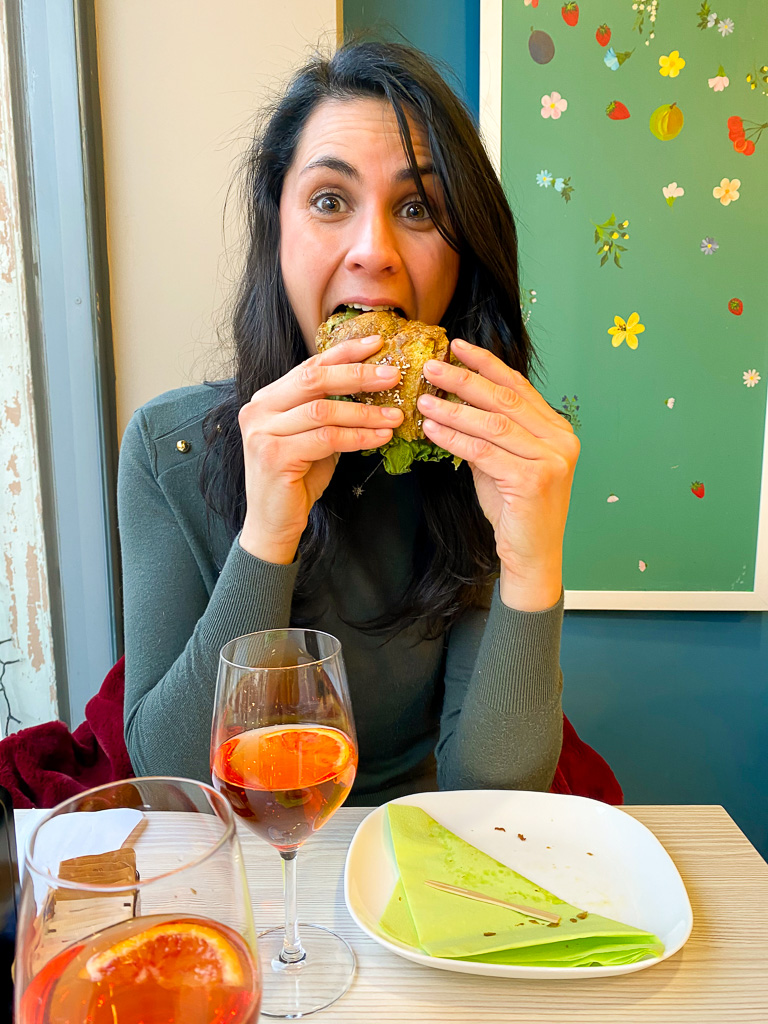 ^^^ First appetizer from NONNA PALLINA .. who wouldn’t want to have a grandmother like that! The selection of sweet and savory is impressive. Local recommended !!! ^^^

Walking to the centre we had noticed a little place not far from our car “Le Zagare”.

The window shop was well stocked with canapés and meatballs.

We took salmon meatballs, cherry tomatoes and anchovies canapes and Simone also chose a sheet of bacon and spinach accompanying everything with 2 glasses of white wine.

Obviously Giorgino was also honored with cuddles and canapés. 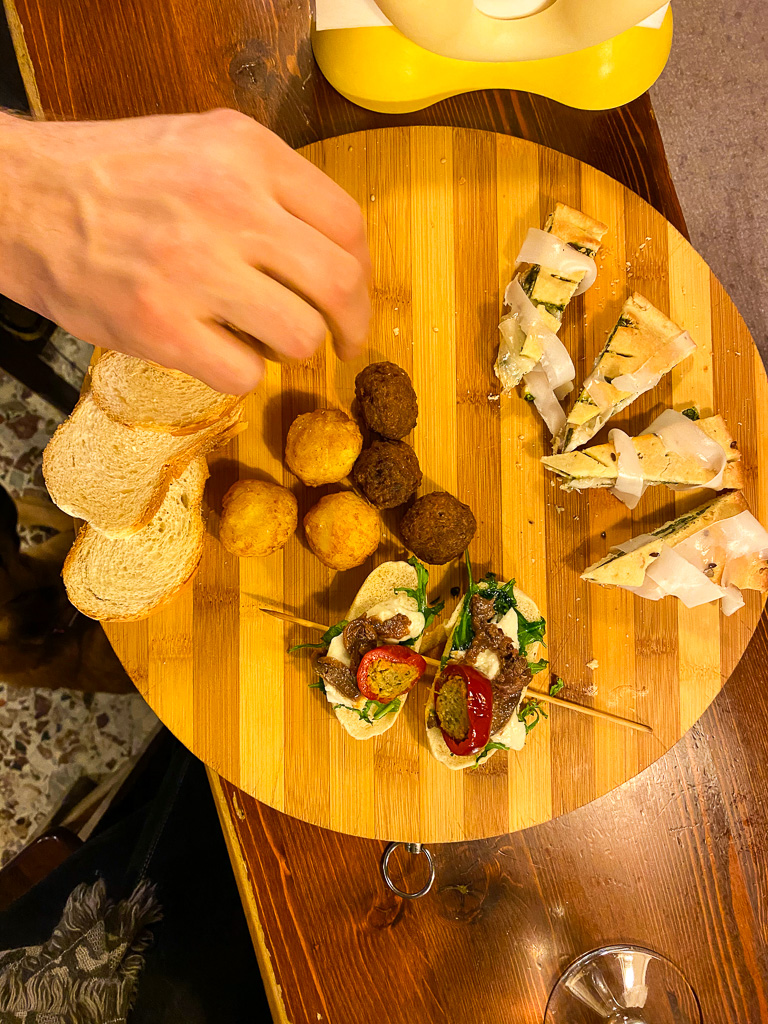 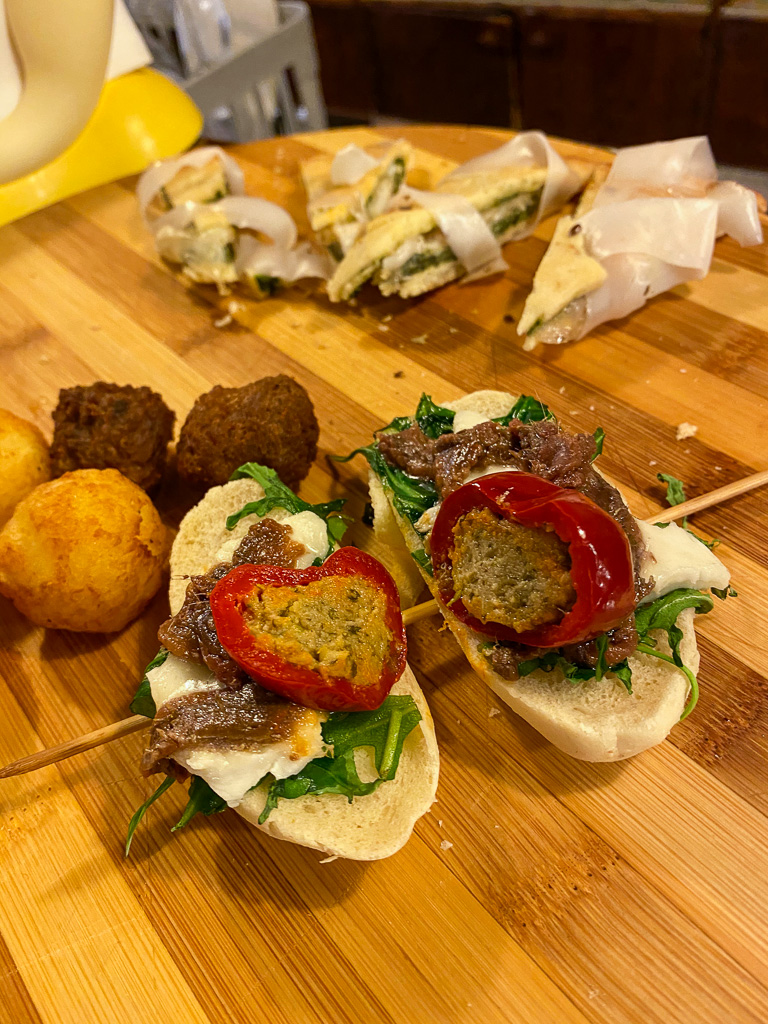 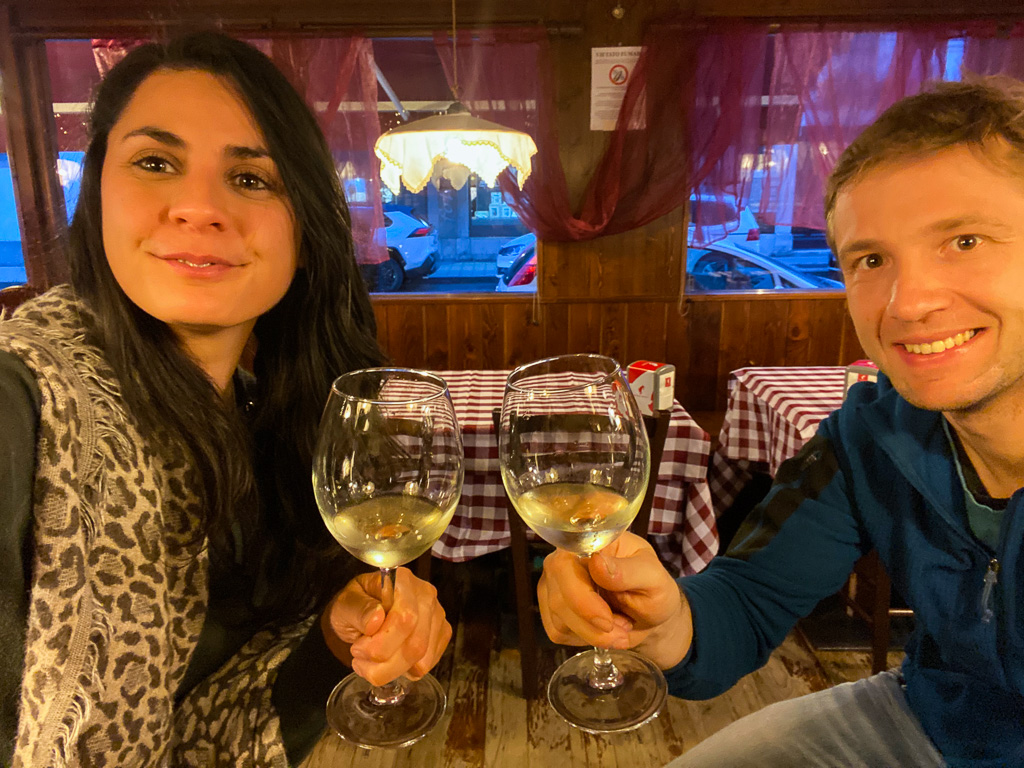 In the end we spent a beautiful afternoon taking some sun with super cool spring temperaturesand making 2 truly level aperitifs.

HIGHLY RECOMMENDED walk and also an aperitif, of course! : D 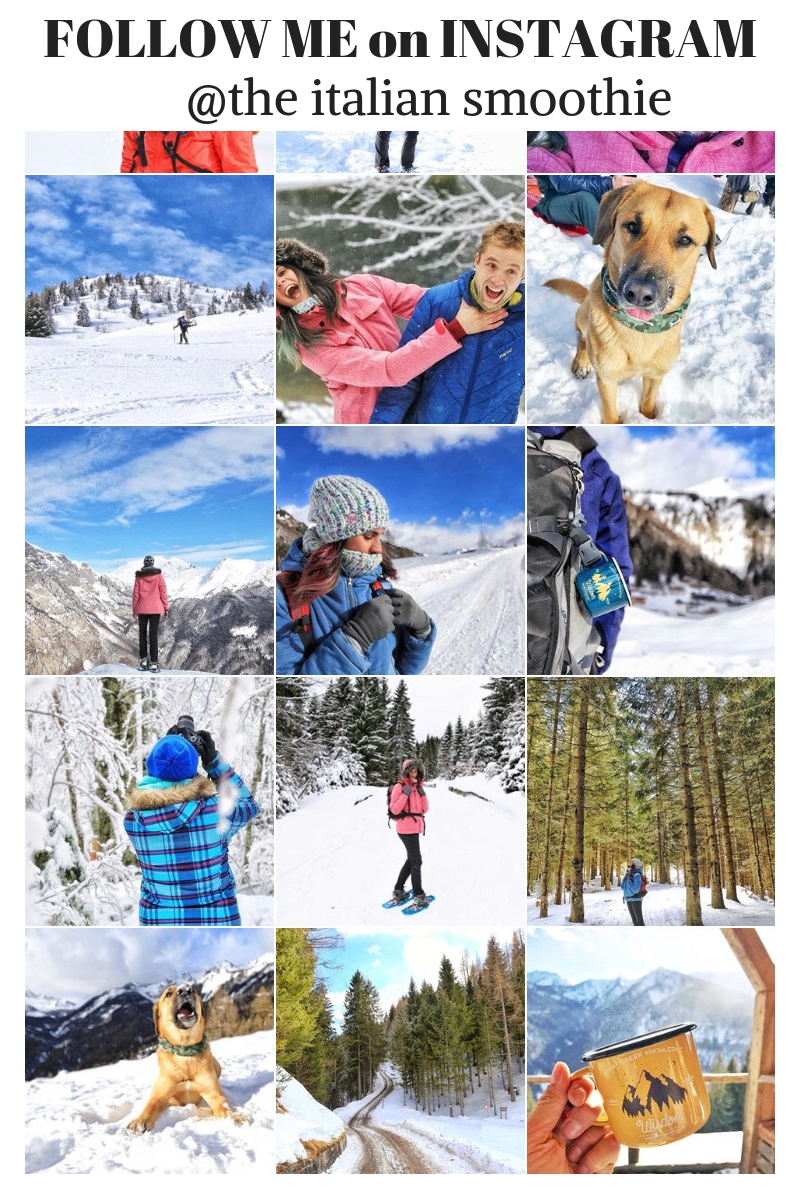