Walk along the Pellegrino path in Friuli Venezia Giulia starting from Borgo Lussari, Camporosso (Tarvisio) towards Monte Santo di Lussari (CAI 613) and eaten at Meschnik hut on the panoramic terrace at an altitude of 1790 meters overlooking the beautiful Julian Alps. 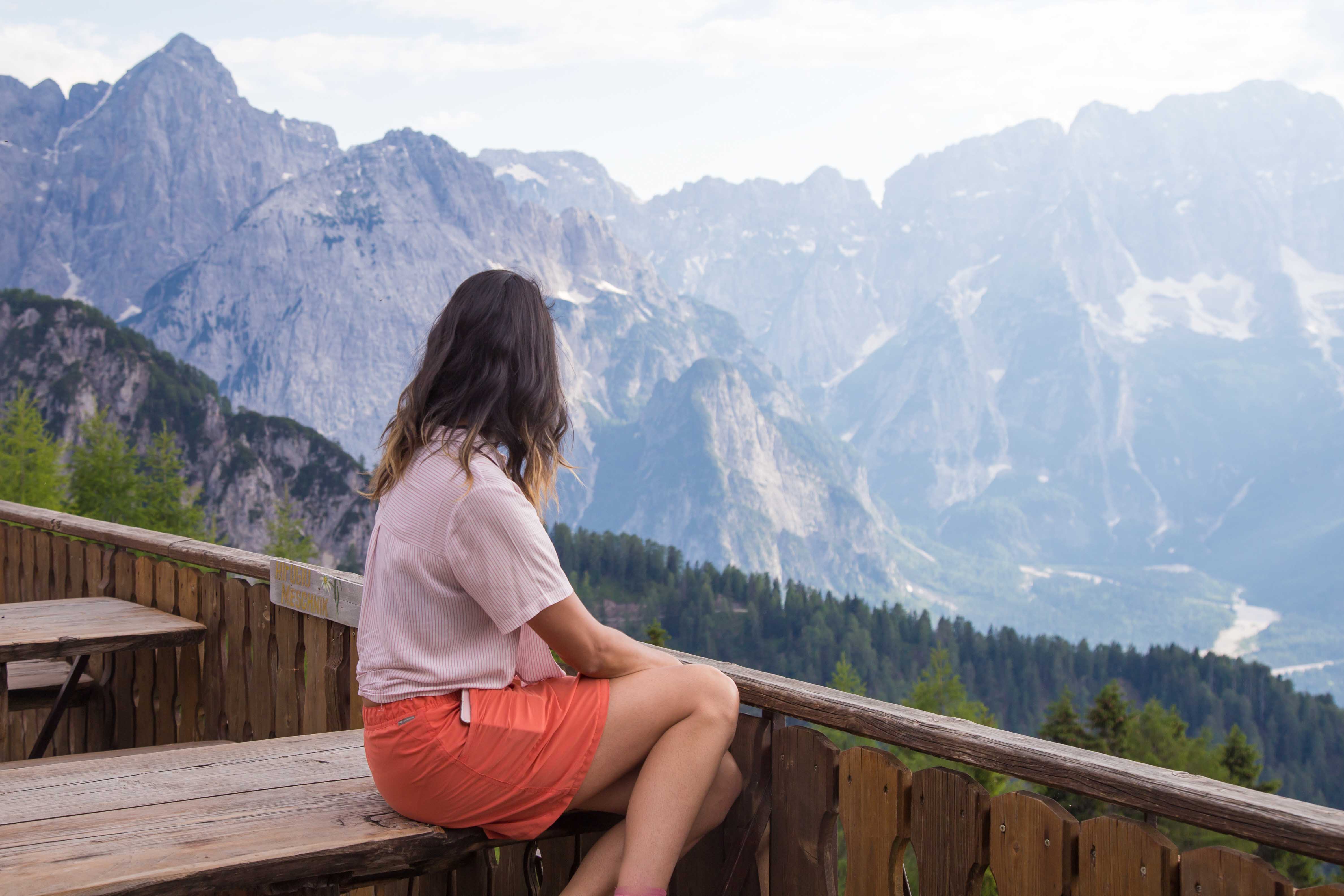 As often happens on Sunday morning I have to work. Wasting a sunny day in July to do nothing is not for us so 2 weeks ago we decided to go to the Monte Santo di Lussari above Tarvisio, reachable in just 2 hours of walking (at least for us) in the afternoon.

I had already been on the Lussari many times but always in the cableway, both in summer and in winter.

We often organize here great meals with friends in my favorite hideaway, the Meschnik hut, or the last restaurant you can find by coming from the cable car or the first if you take the Pellegrino Trail.

Here the owner will always welcome you with a super smile and you can not even talk about their delicious first courses, frico and a thousand other delicacies to eat on the panoramic terrace. I’ve been going there for more or less 10 years and it’s always a show in every season.

I would also like to point out that at the Meschnik hut you can stay overnight and dogs are allowed (which usually is not so obvious in the shelters).

I‘ll be honest. The path is not beautiful until you get to the top. But you climb in a short time and from the top you are right in the heart of the Julian Alps and the view is enchanting. One can not go there at least once. And then above you eat …. I’ll tell you to do!

It starts from Borgo Lussari to 858 m and follows the old historical and religious path of the Pellegrino. Along the CAI 613 road you will find the various stations of the numbered Via Crucis. They will give you hope in times of kind discomfort like

“Oh my God and if I get on and have finished the frico !?”

Here is going up with the numbers to climb you will have the feeling of arriving in a moment. That is not true anyway .. 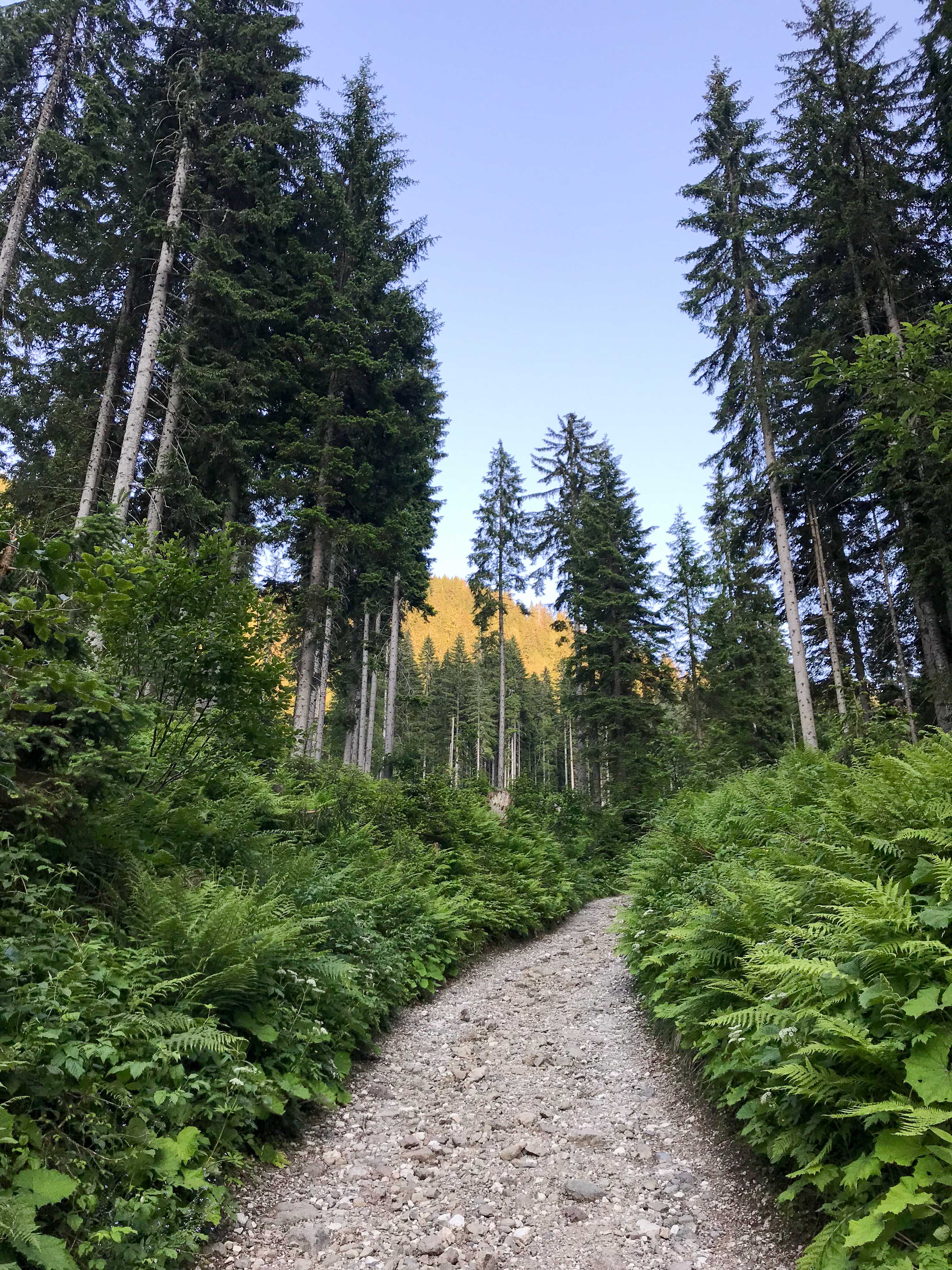 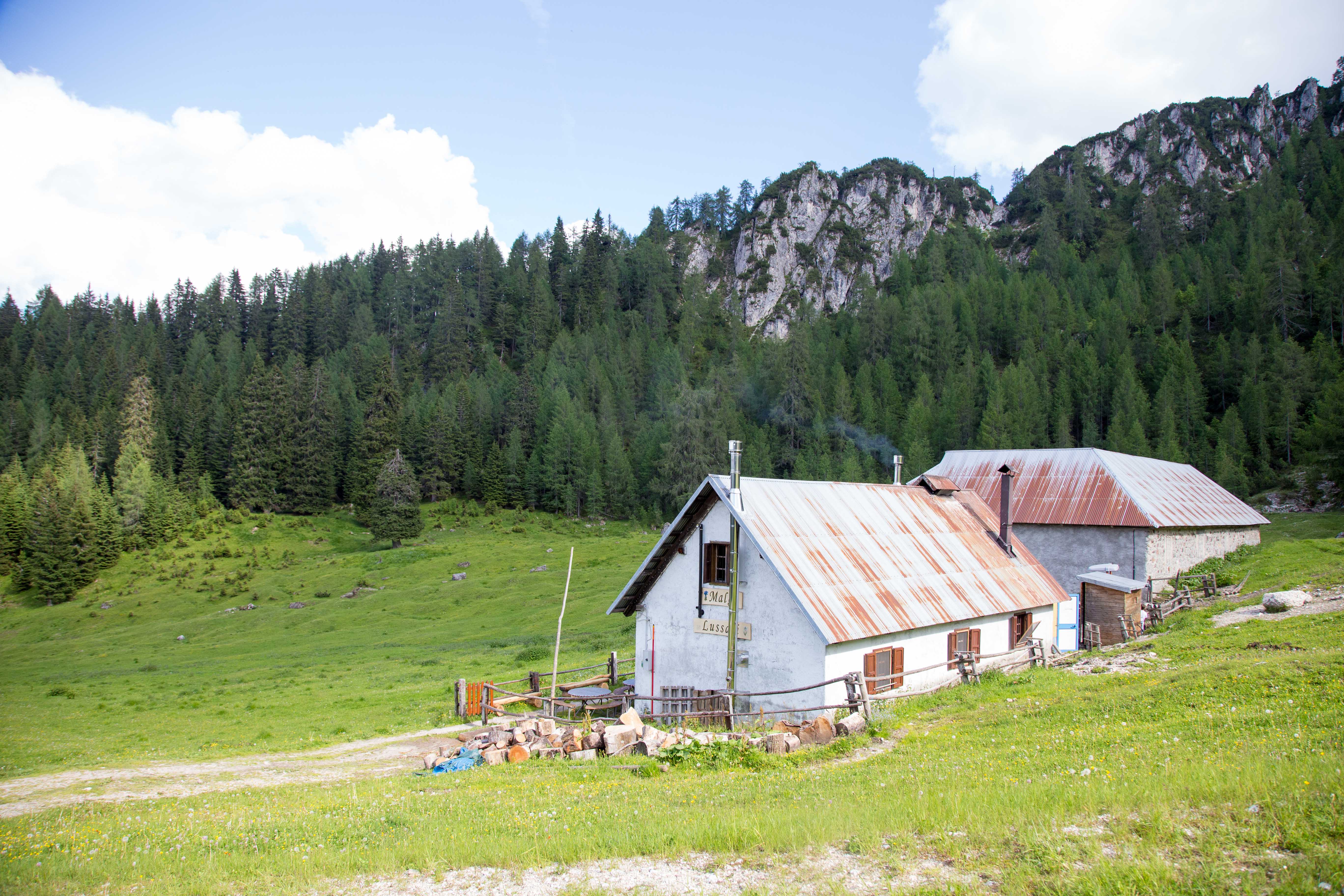 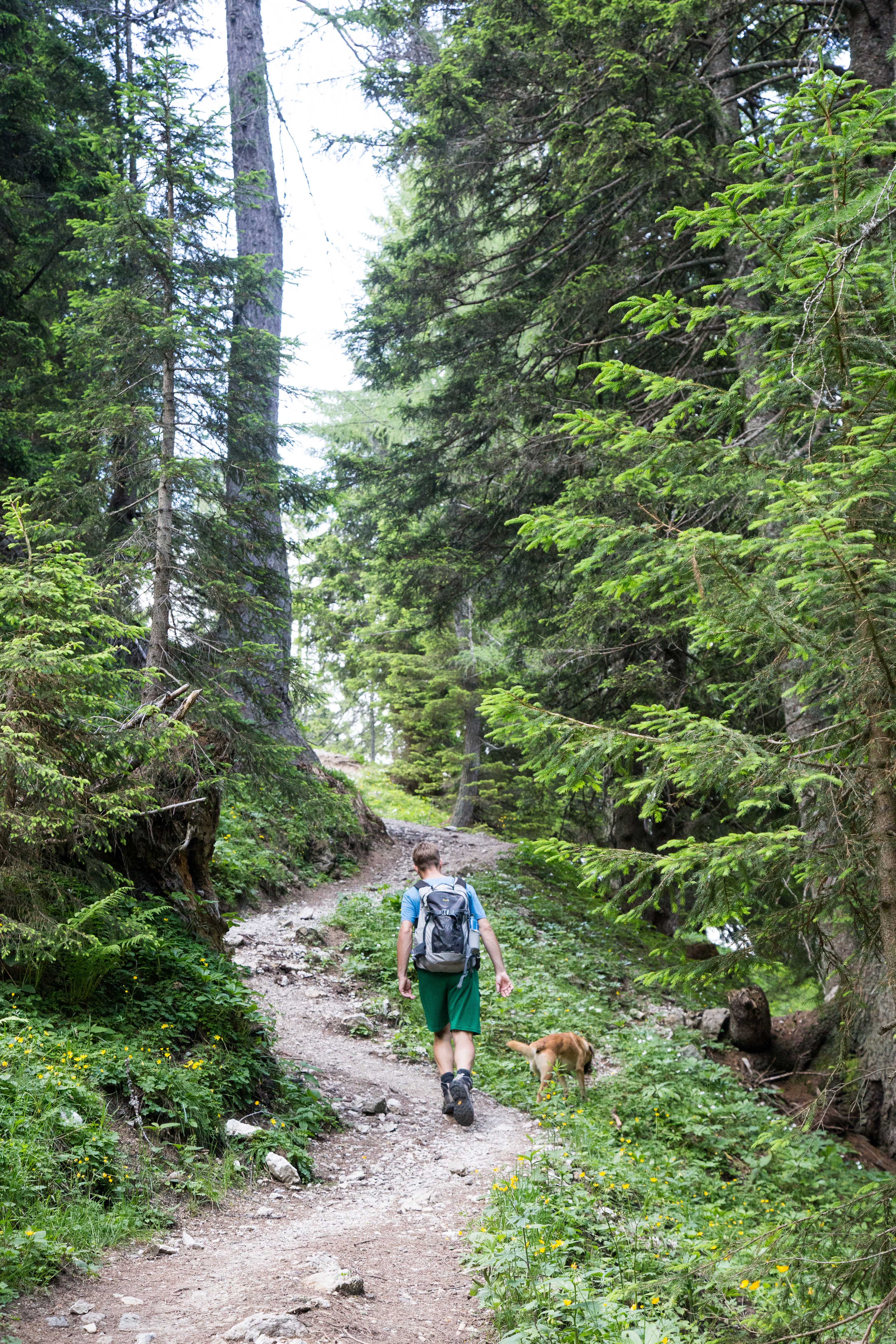 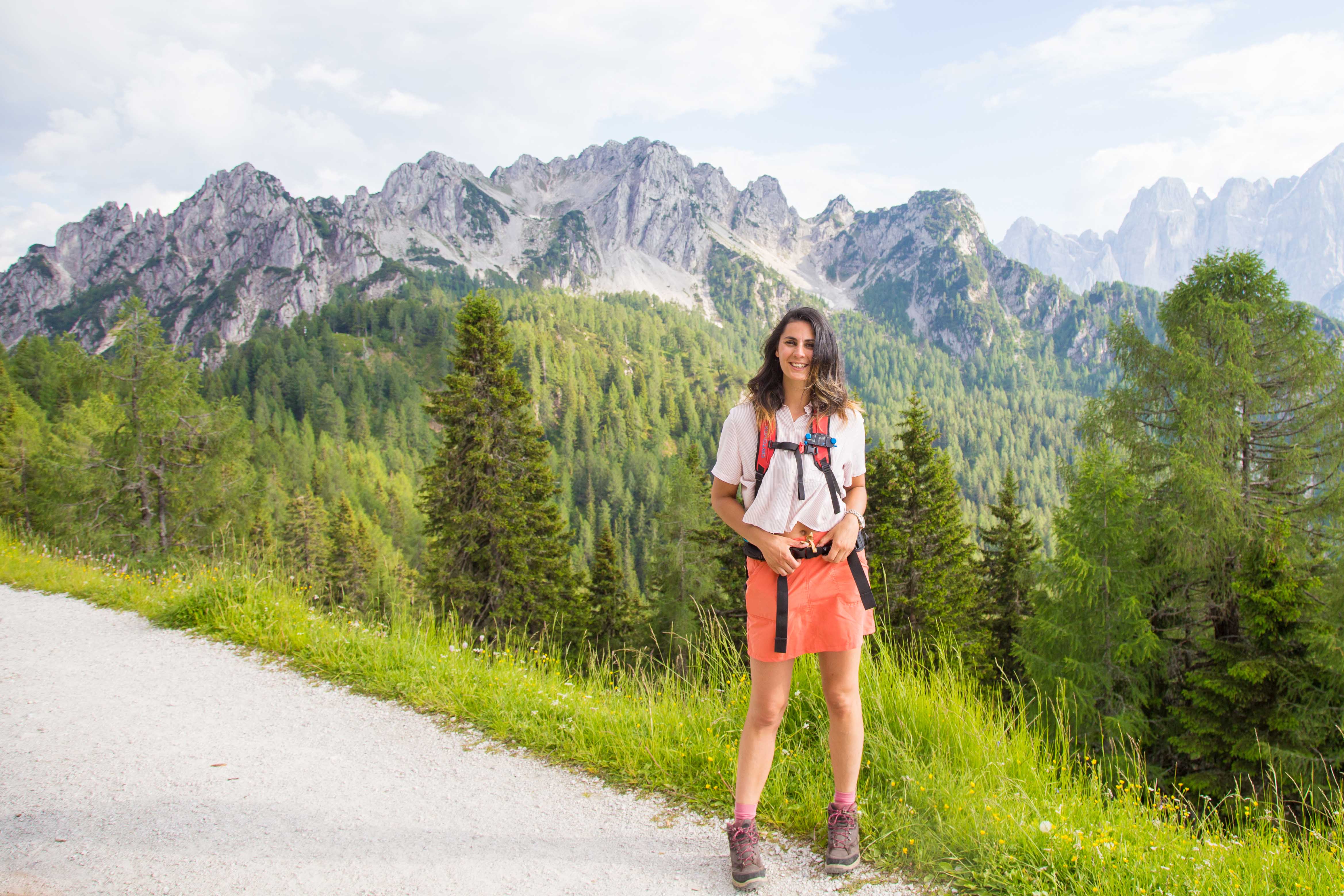 You climb along this path of stones (be careful downhill) totally immersed in the vegetation. Sometimes you can cut pieces of trail in the trees but in short, what path of the Pellegrino is if you take shortcuts? So we have diligently followed the walk up to Malga Lussari (photo above), where you can also see the Lussari ski slopes in summer.

From this point begins the steeper bit but nothing impossible. I have many friends who have also done it with children so it is really suitable for everyone.

In the middle of the forest you will get up quickly and in a flash you will find yourself in front of the beautiful Cacciatore peak, Jof Fuart, and the Jof di Montasio. You can also admire the Austrian peaks like the Dobratsch or the Osternig and see the peaks of the Triglav Park in Slovenia like the Mangart.

From Lussari there is truly a 360 ° view and if you are not good at recognizing them at first glance I recommend the app “PeakFinder” to find out the name of all the mountains that surround you. 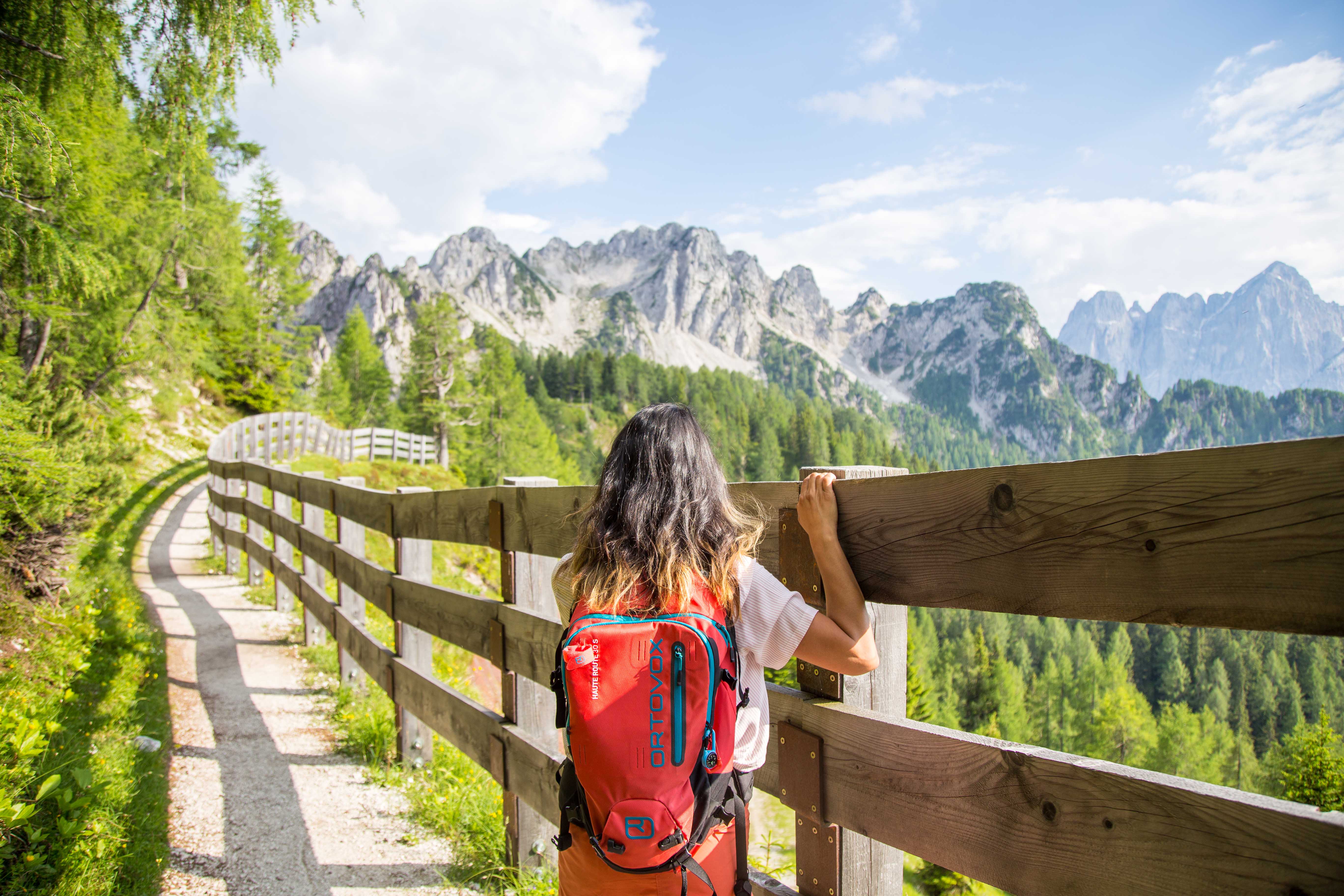 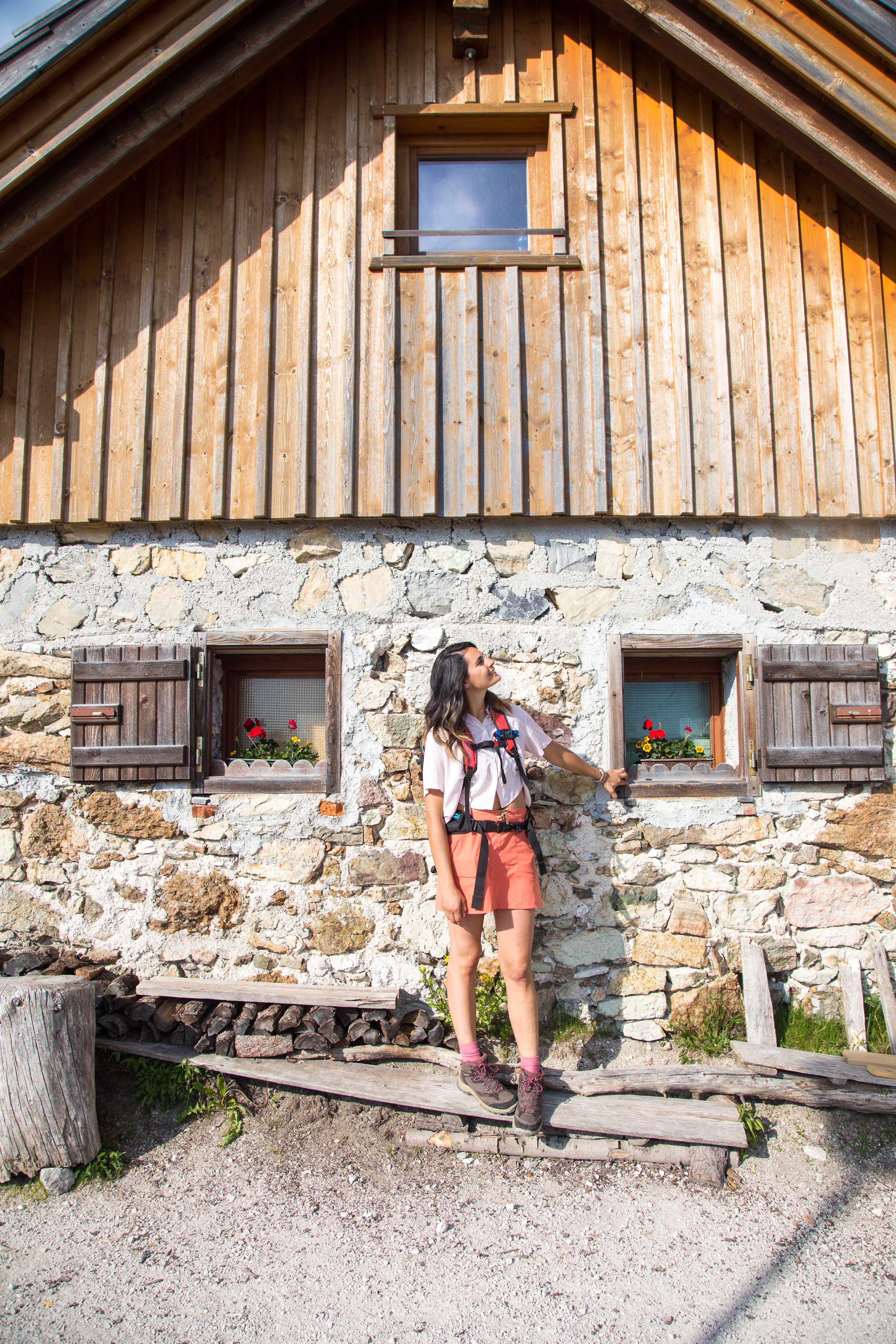 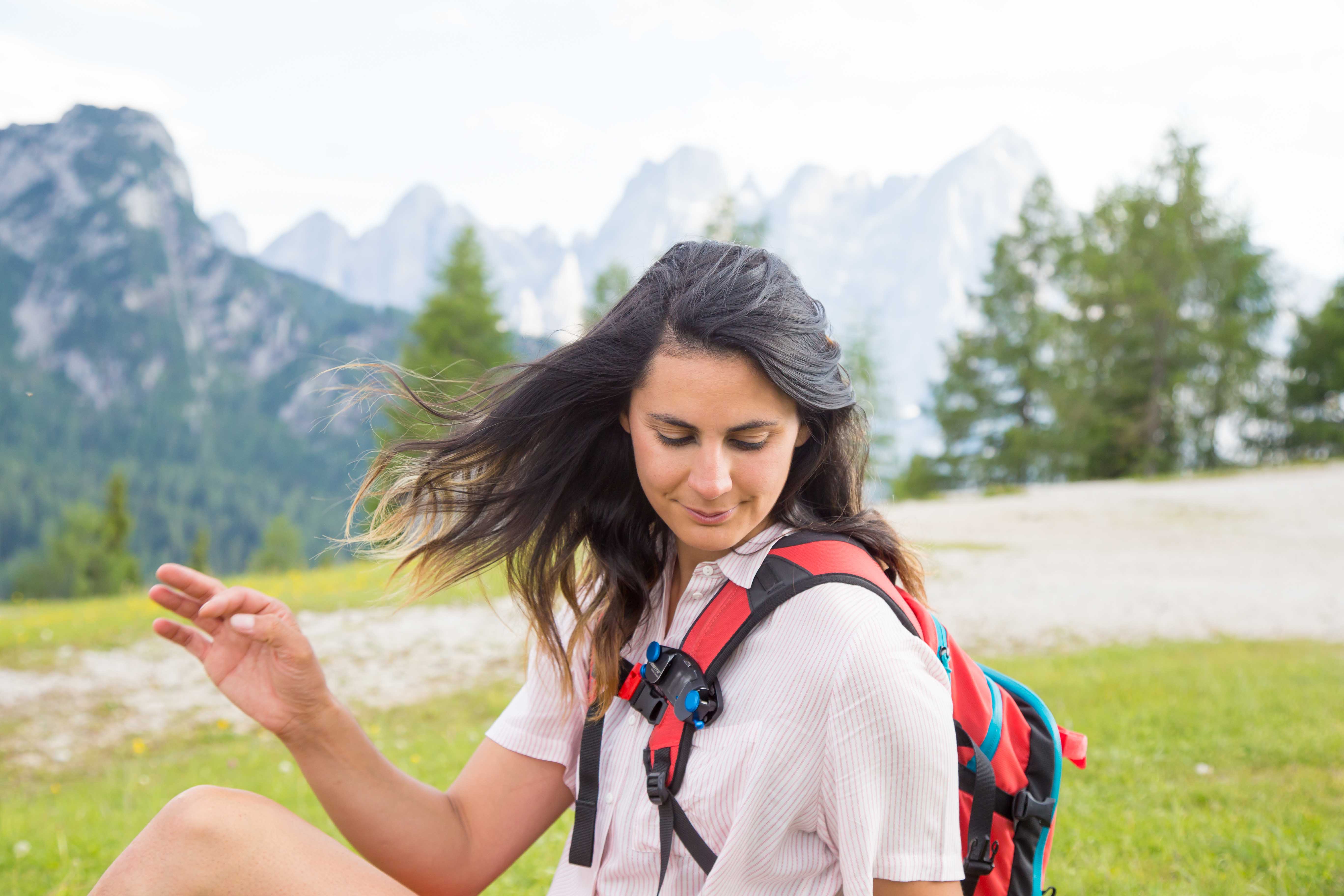 We arrive at the top which is 6 p.m.. The light is fantastic and in the distance we hear the siren sound that signals the last cable car ride. Even many people working on Lussari in shops and restaurants are quick to get off and go home while only those who spend the night here stay at the top.

Step to greet Micky at Meschnik hut and before stopping to eat the long-awaited frico (for those who do not know it is the typical Friulian dish made of potatoes and cheese and is SOO GOOD!) I decide to take a ride and take some pictures. Both Simone and Giorgino do not seem very happy and follow me listless.

It was the first time that I happened to go up at this time and especially to see the Lussari so empty, without tourists and all the shops closed. We were the only ones to walk in the central street and even when we decided to stop and eat the terrace and the sun coming down was all for us. Superb. 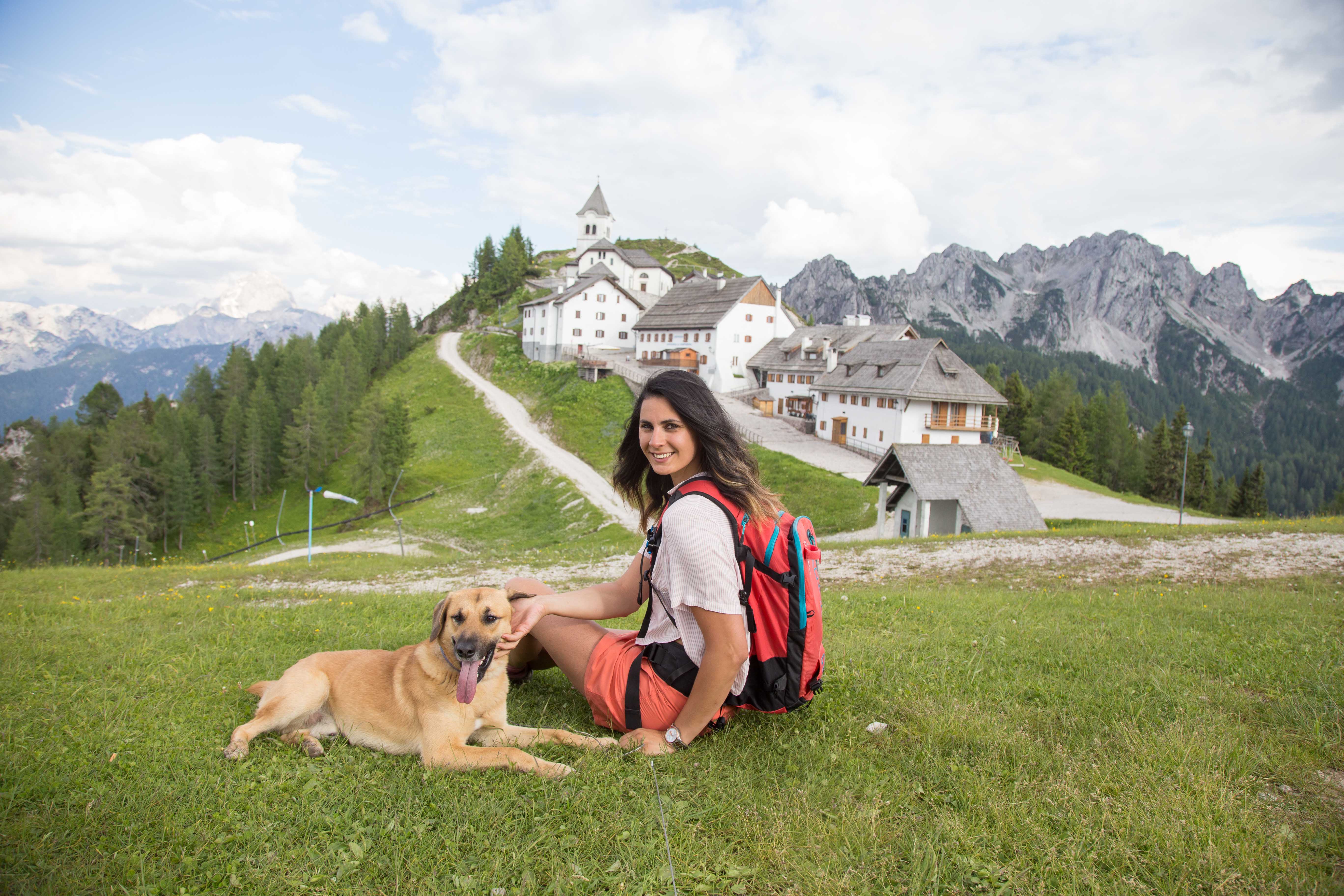 A LITTLE BIT OF STORY

But what is the Holy Mountain of Lussari and why did it become?

The story tells that in 1360 a shepherd boy found an image of the Mother of God on Mount Lussari and gave it to the parish priest who kept her safe in a closet. This image in a closet did not want to stay and the next day was back on Mount Lussari. It happened again and again until it was decided to build a small chapel right on the mountain.

Over the centuries this chapel became increasingly important and a destination for pilgrimages also from neighboring states such as Austria and Slovenia, but not only. In fact, after the church it was decided to also build a refreshment point to accommodate pilgrims in transit. Lussari is also a destination for the Celestial Way, a pilgrimage route that unites Italy, Austria and Slovenia, touching various places that are significant for believers.

It has been estimated that in the distant times  10,000 pilgrims passed through, that in periods when there were no cars or economic possibilities it was very much. In fact, the tradition started the pilgrimage season on June 24th from the feast of St. John the Baptist until October, before all the Mount Lussari covered itself with snow. 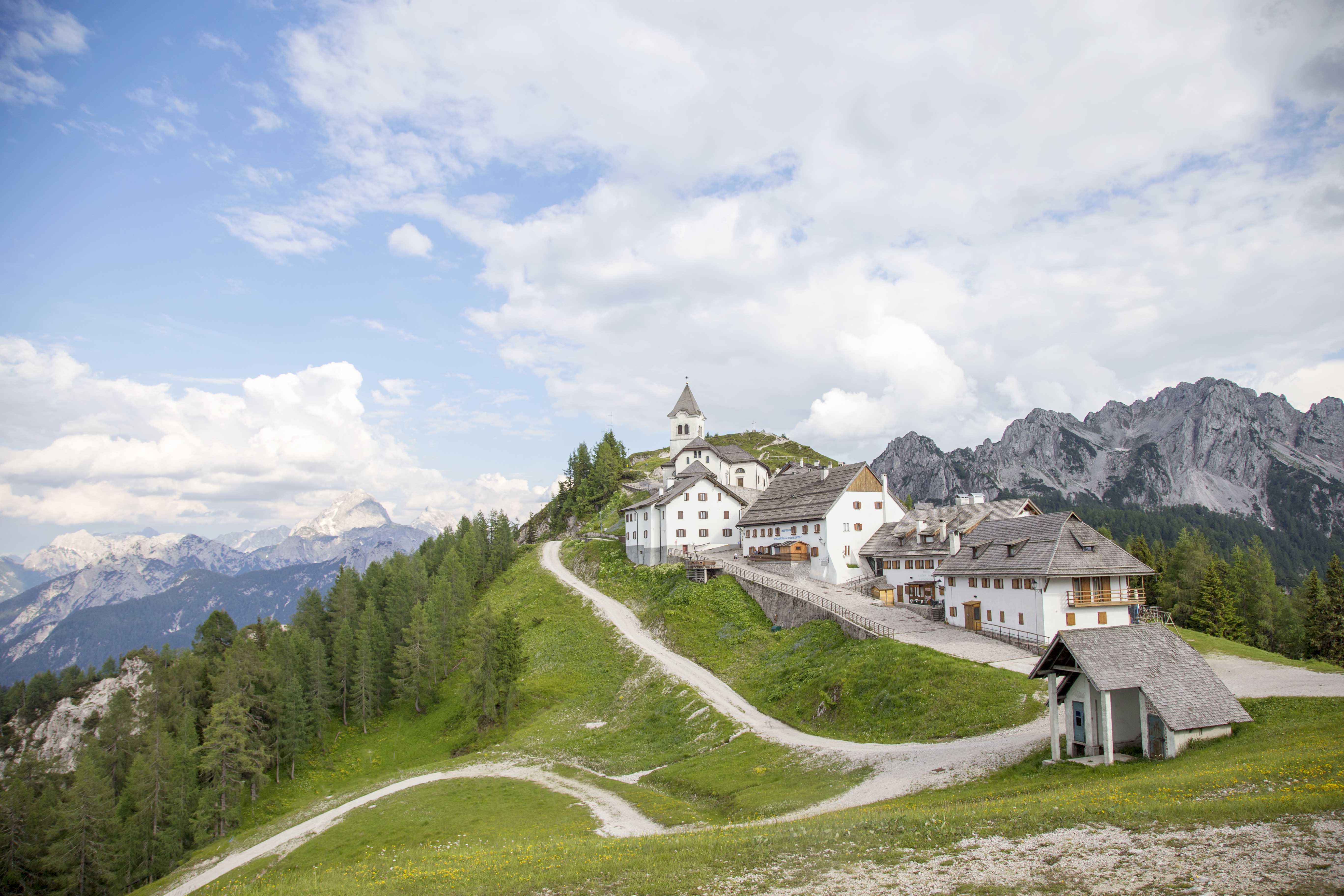 After the pictures we ran to our favorite terrace, the Meschnik hut where we ordered Frico and Spetzel (a kind of spinach gnocchi with smoked ricotta) and 2 beers. Since we were the only ones we could leave Giorgino free, wandering without fear from our table to the meadows below.

Needless to say that the food was delicious and also the sweets we chose later. For fear of being all closed we had brought rice with vegetables and not to make mistakes … we ate that too!

I do not tell you the face of the waitress: D. 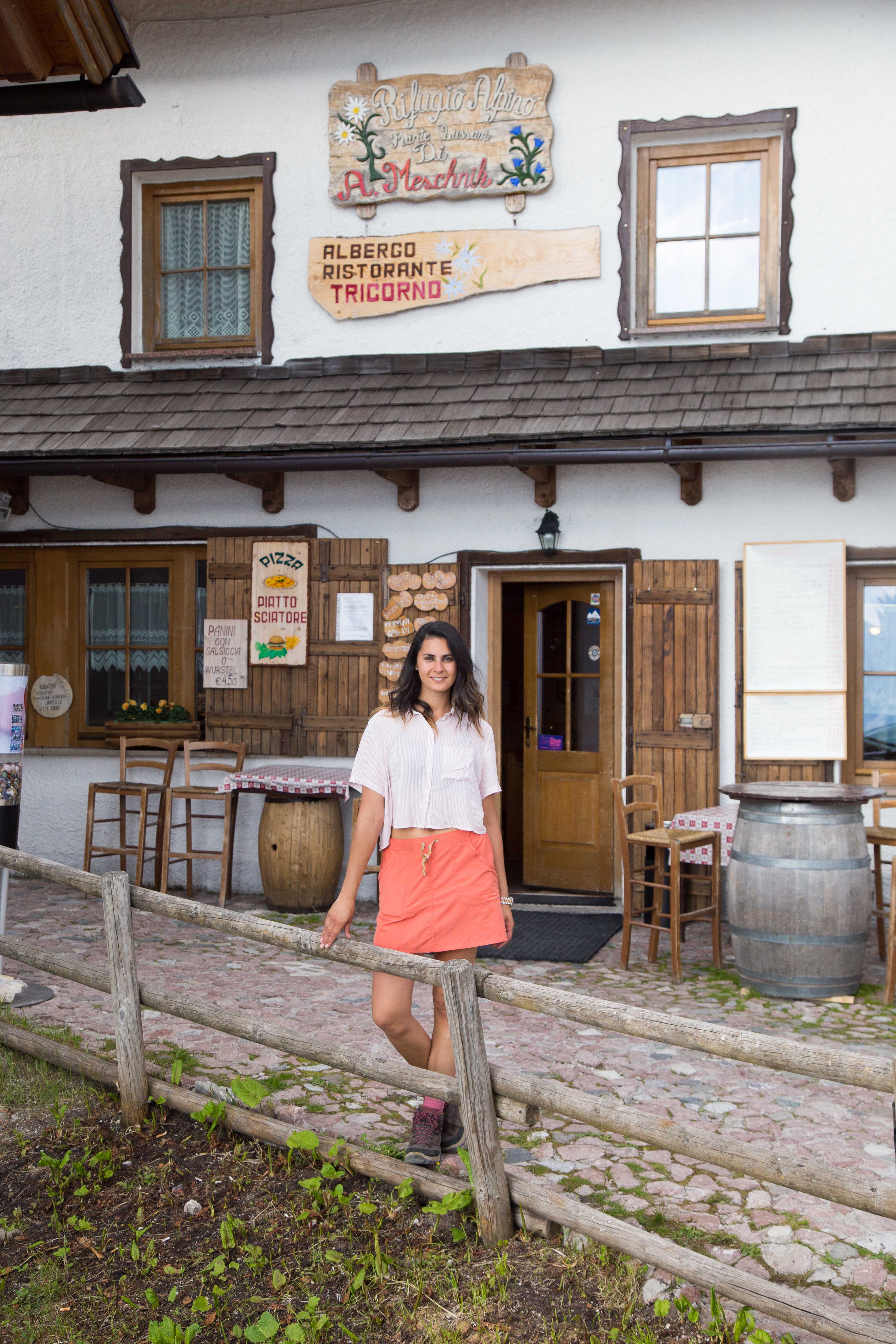 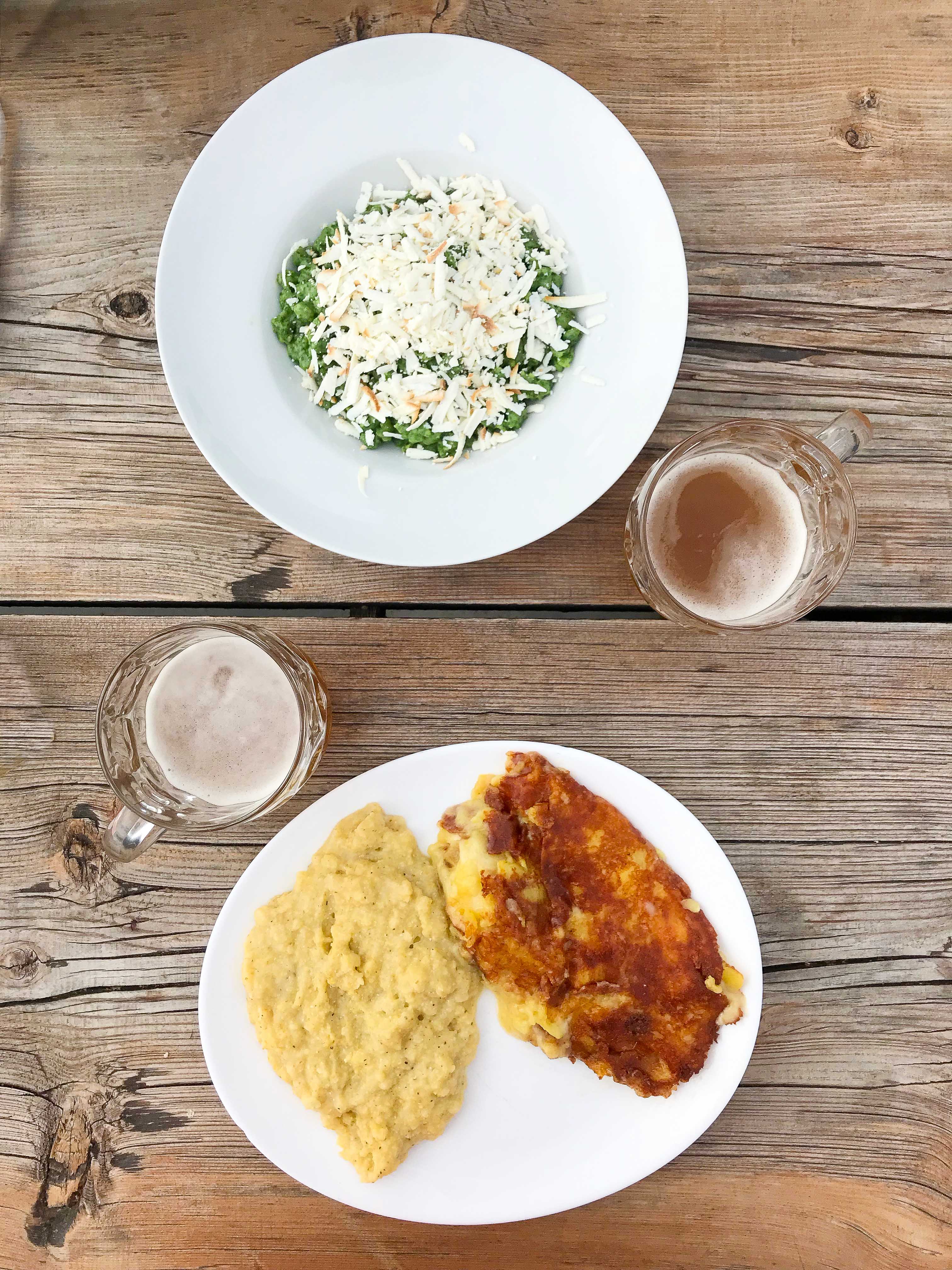 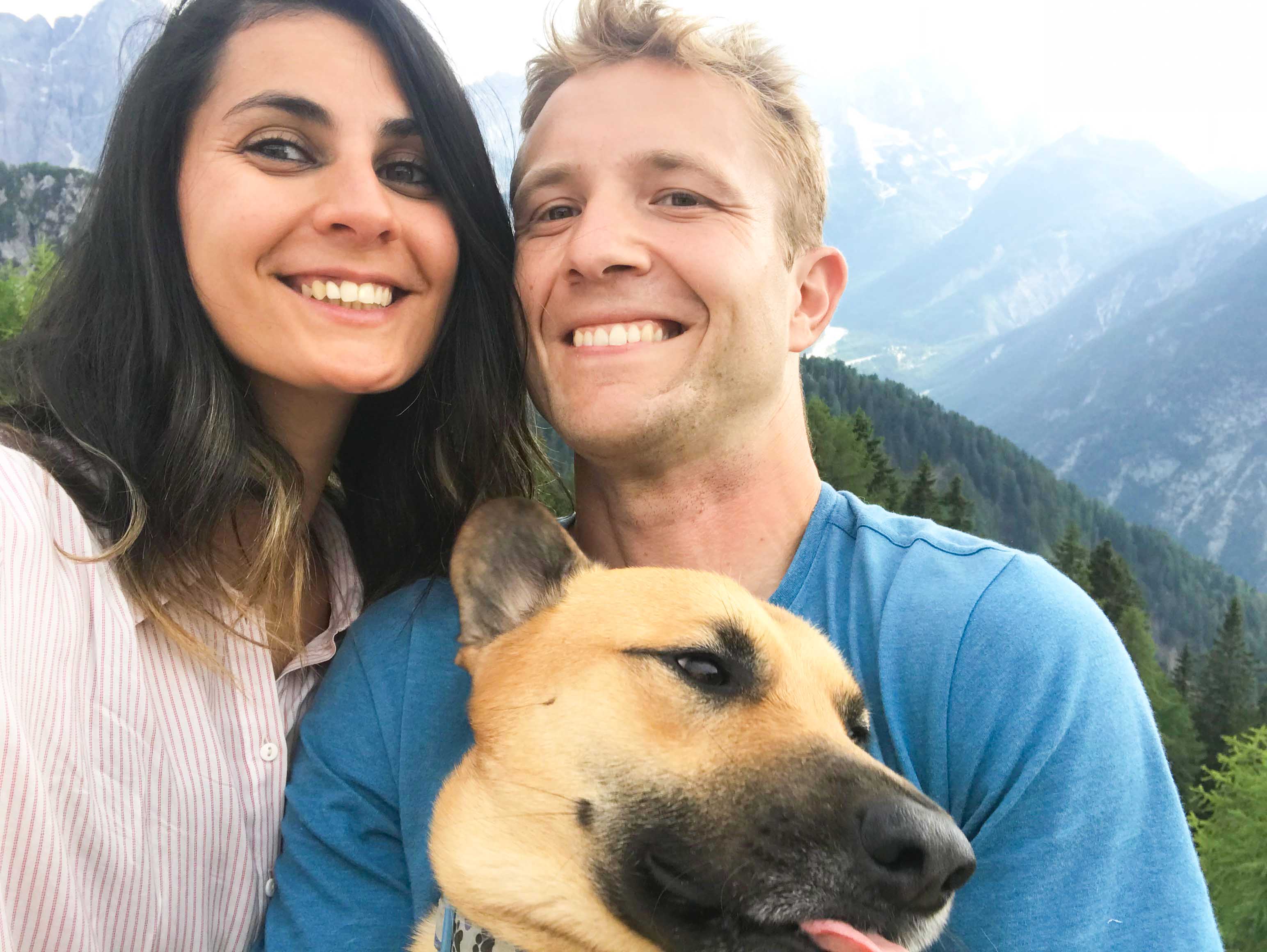 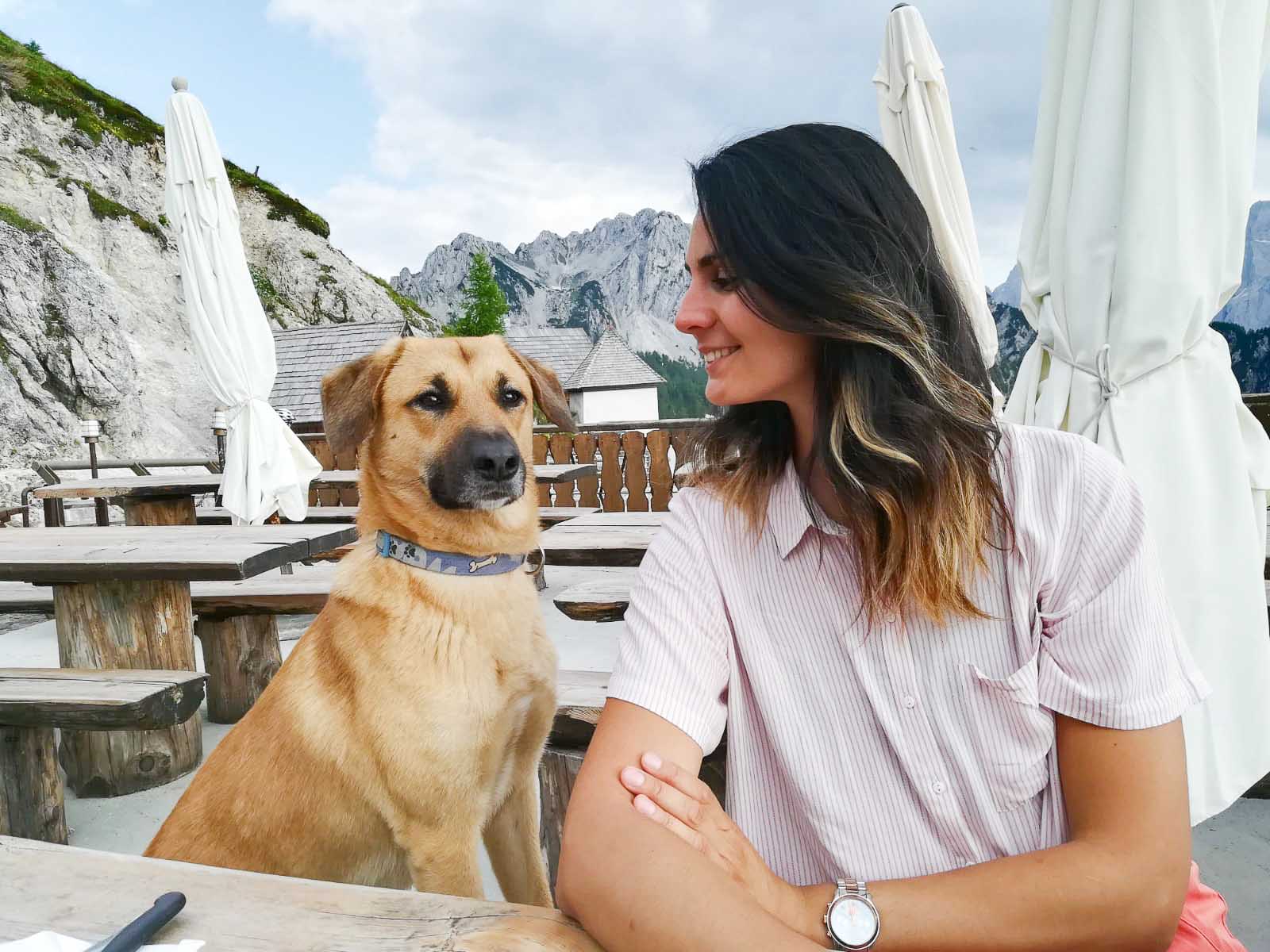 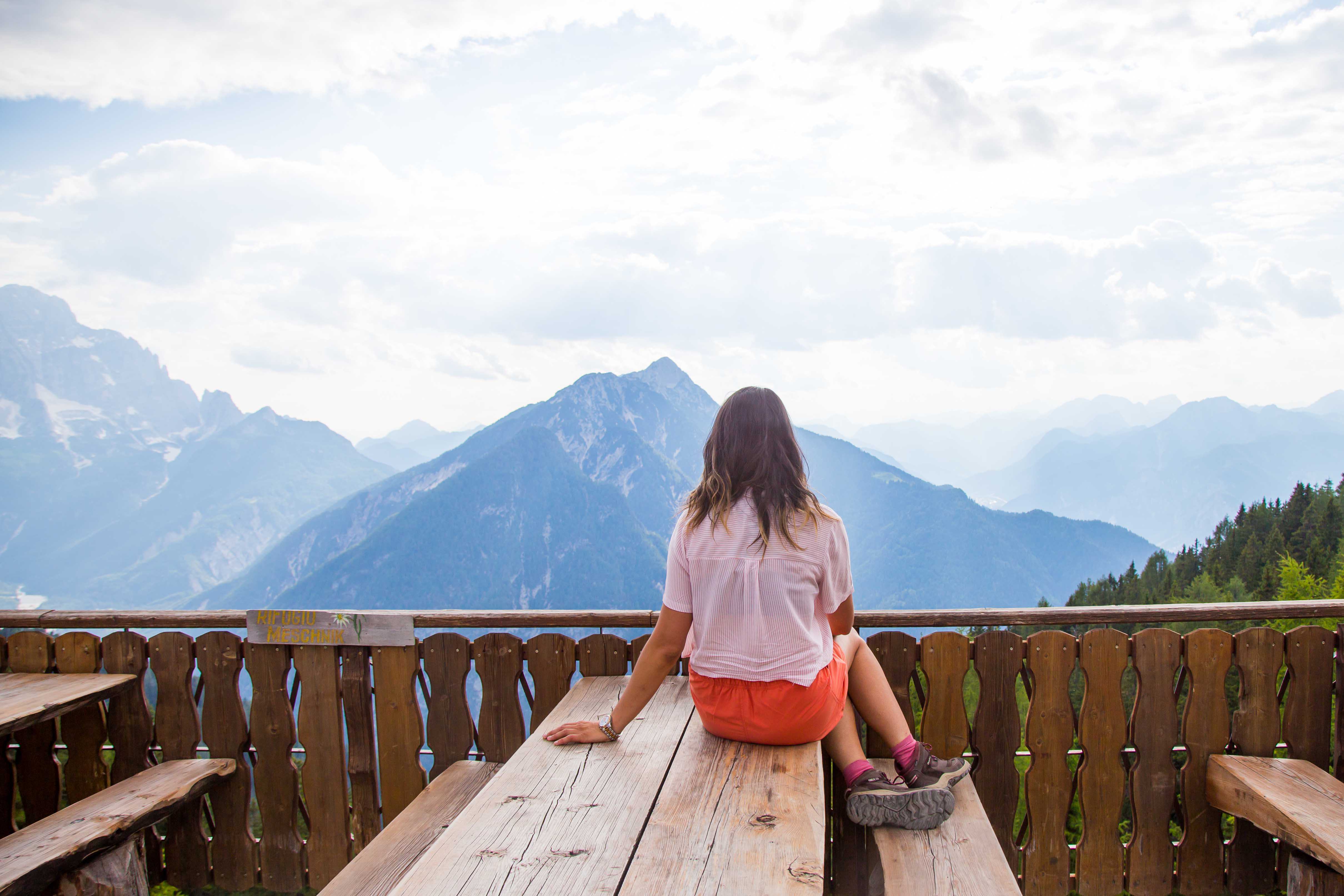 Guys the tops from up here are a real show. Really to be hours and hours looking at them. The song of the birds, the sun that begins to set. This remains one of my favorite places throughout Friuli Venezia Giulia. You can not come here at least once in the summer and maybe stop to sleep and wake up in this enchantment.

And so ‘after a good “snack” and having enjoyed the view a little bit we took the path and returned to our car. In short, a nice afternoon at 2 steps from home.

But how much I love my Friuli Venezia Giulia: D

And you? Have you ever been here on the pilgrim’s path? 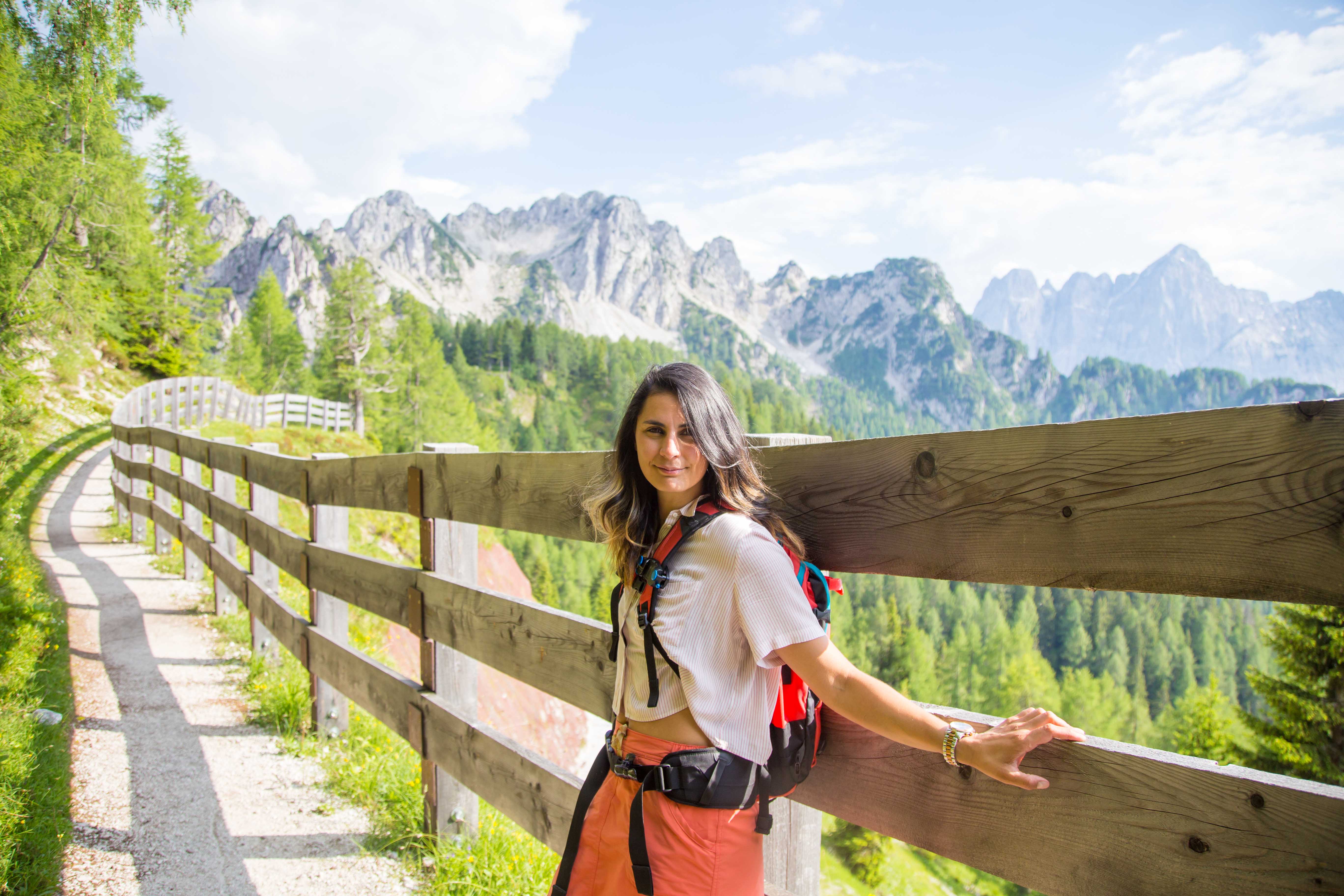